We don’t like talking about it, but 1 in 5 men will experience it. And contrary to popular belief, erectile dysfunction can affect men at any age. Survey after survey shows that most sufferers won’t go to their GP about it, despite there being plenty of treatment options available on the NHS. One such treatment is Sildenafil - something you might know better as ‘Viagra.’ We’ve taken a deep dive through the latest NHS prescription stats (August 2018’s data released in October 2018) to assess how many times the drug is prescribed, where it’s prescribed the most and how much the NHS spends on prescribing it. But first, let’s deal with an important question...

What’s the Difference Between Sildenafil and Viagra?

The only difference between Viagra and Sildenafil is the price tag! Medically speaking, they’re exactly the same drug. Identical. The active ingredient in both is sildenafil citrate and both are available in different strengths. Essentially, Sildenafil is the generic version of the medicine and is produced by a number of different manufacturers. Viagra, on the other hand, is the branded version which was patented by its manufacturer, Pfizer. However, when the patent expired, manufacturers were free to make their own generic versions, which in turn lowered the price point significantly for men looking for ED treatment.

Viagra and Sildenafil Prescription Statistics in a Nutshell

We’ll kick off with the short summary of our key findings for those of you who’d rather get straight to the point:

How Often is Viagra Prescribed Instead of a Generic Version?

With NHS funding very much at the top of the agenda when it comes to the UK’s healthcare, one area of saving is in prescribing generic versions of anything over branded ones where possible. And with Viagra/Sildenafil, it definitely is possible. We’ll say it again - there’s medically no difference between the two and generic Sildenafil is incredibly widely available. Yet what we found when we looked at the cost of all practice prescription of sildenafil and viagra combined in August 2018, is that:

This highlights the phenomenal cost difference between the two medications.

In other words, the NHS wastes significant sums of money as the result of branded Viagra being prescribed where generic Sildenafil would be fine. The NHS website specifies:

"You can get Sildenafil on the NHS if you have erectile dysfunction or pulmonary hypertension. Branded versions of sildenafil such as Viagra are not available on the NHS, except in special circumstances."

So what might these special circumstances be? We asked our own Superintendent Pharmacist, James O’Loan, for his take. He comments: “There’s never a physical medical reason to prescribe Viagra over generic Sildenafil. It’s completely unnecessary. The only real reason I can see for a branded version accounting for 13% of NHS cost relating to this drug is patient insistence. Many patients don’t know the two are the same or feel that, because they’ve had positive results from Viagra before, they need Viagra again. In this case, I’d see it as the job of the prescribing GP to educate the patient. When we’re dealing with something as important as the NHS budget, we simply have to make savings where we can, and only prescribing generic versions of medication where possible is a really simple way to do so. When you consider the spend on the branded product for just this one drug, then you can’t help but wonder what the NHS spends on buying branded across all prescriptions and all drugs.

The Sildenafil Capital of England is...

We broke down the practice level prescription statistics into CCGs, counties and regions to find out where these items are most often prescribed on the NHS. Here are the top 20 counties in terms of Sildenafil or Viagra prescriptions: 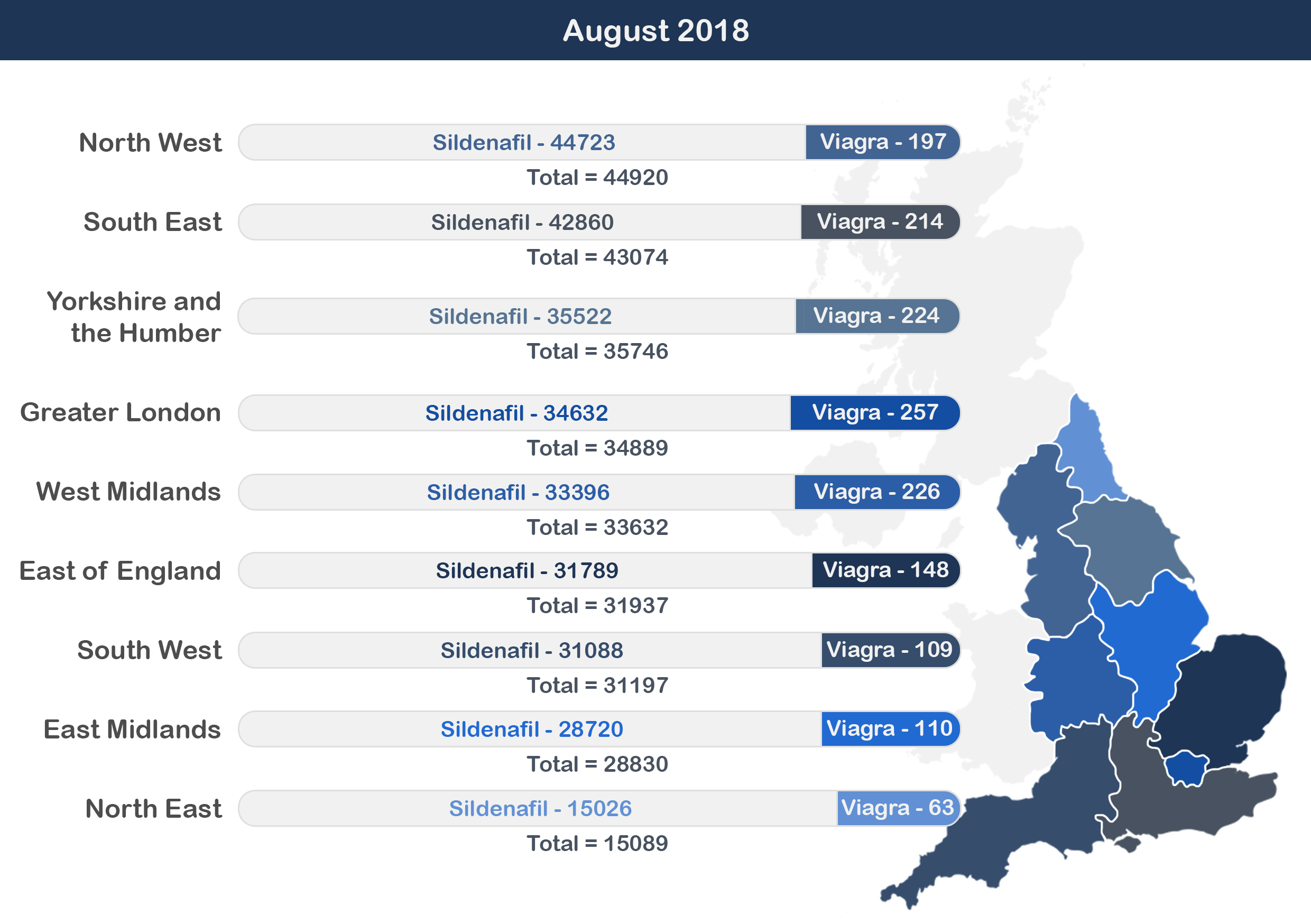 Regionally, however, the North West takes the top spot:

Where is most of the brand-buying waste happening?

We know the average across England was 11% of spend going on the branded version, but how does each part of the country stack up? The 10 worst offenders in terms of buying branded were:

Almost £1 in every 5 was branded viagra in Staffordshire and West Yorkshire. At the other end of the scale, Northamptonshire hasn’t spent anything on branded Viagra. Gloucestershire, Worcestershire and Oxfordshire all fell under 4% of all spend on the branded product.

Getting Viagra without an NHS prescription

The data set we analysed came from NHS prescription data. But not all Viagra or Sildenafil is prescribed by the NHS. Some medication can now be bought over the counter after consulting with a pharmacist. And some people use private doctor and prescription services like ours to acquire Viagra or sildenafil. But there’s also a worryingly large market in counterfeit and unlicensed Viagra. In 2015/16, over £11 million worth of counterfeit Viagra was seized in the UK. Our very own James O’Loan advises patients not to buy from unlicensed premises or websites. He suggests: “As the data shows, hundreds of thousands of people go to their GP each month and are prescribed Sildenafil. And if you don’t want to go to your GP, online doctor services like ours are a convenient way to get a private prescription and the medication sent to you. Don’t buy from unlicensed websites because the reality is that you really don’t know what you’re getting. And when it comes to medication, that could have some serious implications on your health.”