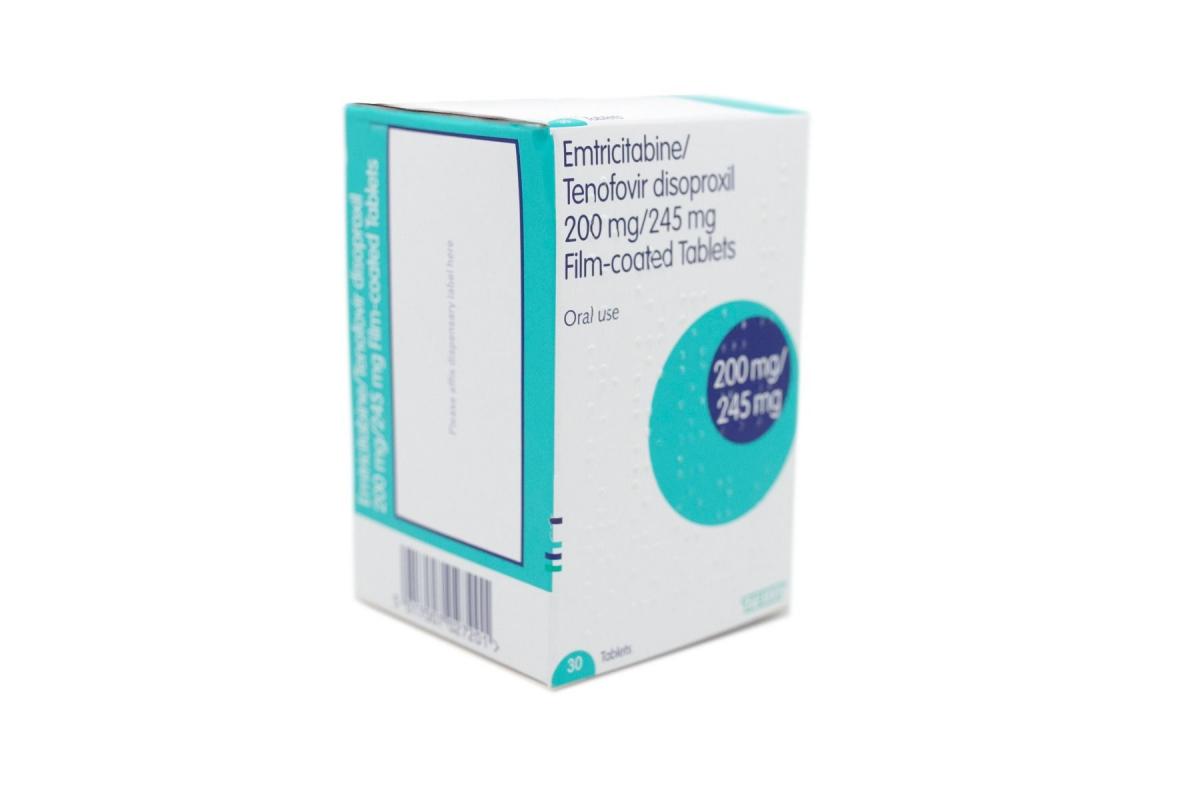 PrEP is a ground-breaking drug that can potentially put an end to new HIV diagnoses worldwide. It stands for pre-exposure prophylaxis and has been licensed for the prevention of HIV since 2012. In the following years, we’ve seen instances of HIV decline in areas where PrEP is available, but unfortunately, not everyone has access to it.

HIV is known to affect certain groups more than others, for example, men who have sex with men (MSM), injecting drug users and people of black African origin have an increased risk of contracting HIV compared to the rest of the population. Given that people in these risk groups are lively to reside in every country in the world, it’s easy to think that PrEP would be available everywhere, but sadly this isn’t the case.

We decided to look at how many places in the world can currently access PrEP. The United Nations recognised 195 countries, so we looked at the data available to us from PrEPwatch to create an overview of PrEP availability worldwide. Currently, 65 of the countries recognised by the UN have some sort of PrEP program in place for their citizens. 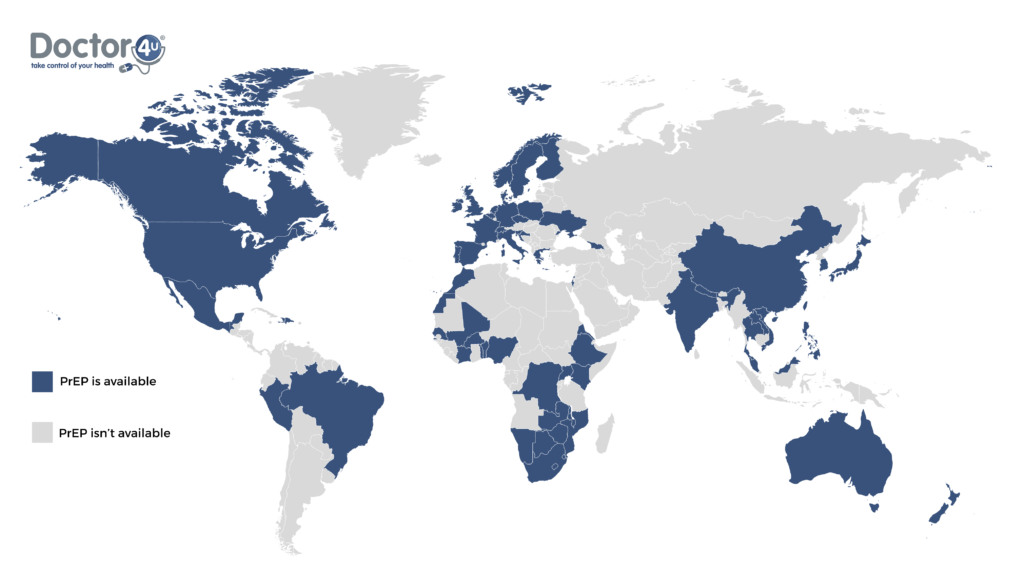 Having some kind of PrEP program means that people in need are able to access the drug fairly easily and that it is licenced for use in that country and approved by the government. However, the 65 countries that have made PrEP available for their citizens only make up 33% of the world, which equates to a third of the world. 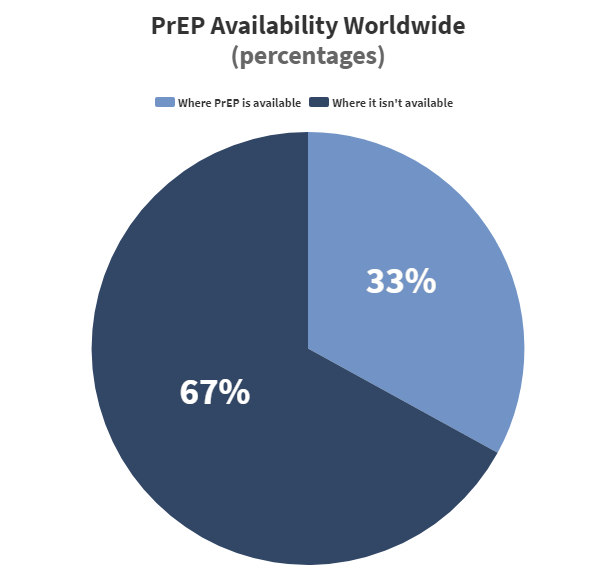 Whilst looking at the PrEP statistics, we decided to look further into which countries did and didn’t offer a PrEP program for their residents. We found that there are several countries that are classed as having high instances of HIV, and according to www.iwantprepnow.co.uk, these are the 45 most at-risk places: 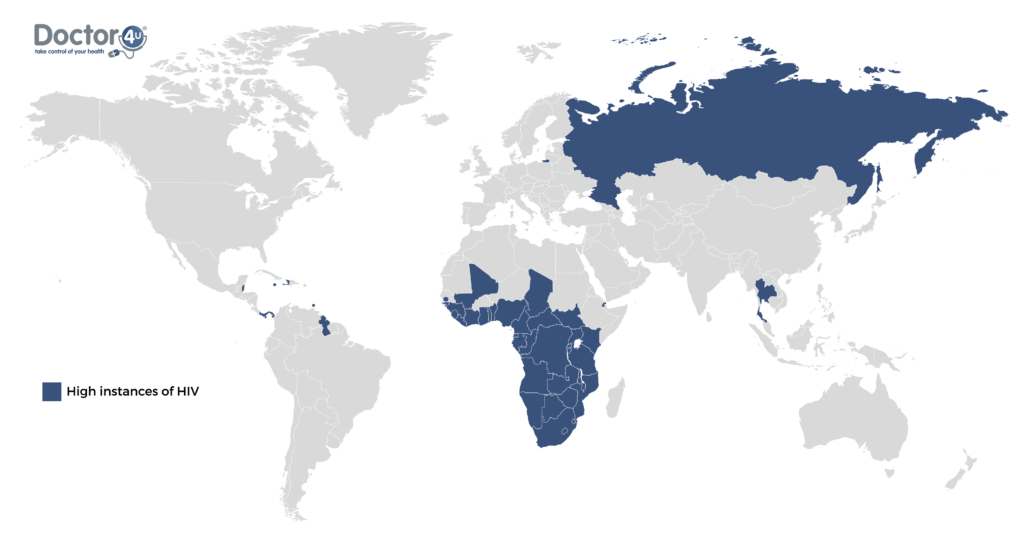 24 of these countries don’t offer PrEP, which equals 53%. In other words, just over half of all countries that have high instances of HIV have decided not to implement a PrEP program, despite the risks. However, as we can see from the graph below, a vast majority of these high-risk countries are in Africa – a continent that is disproportionately affected by HIV: 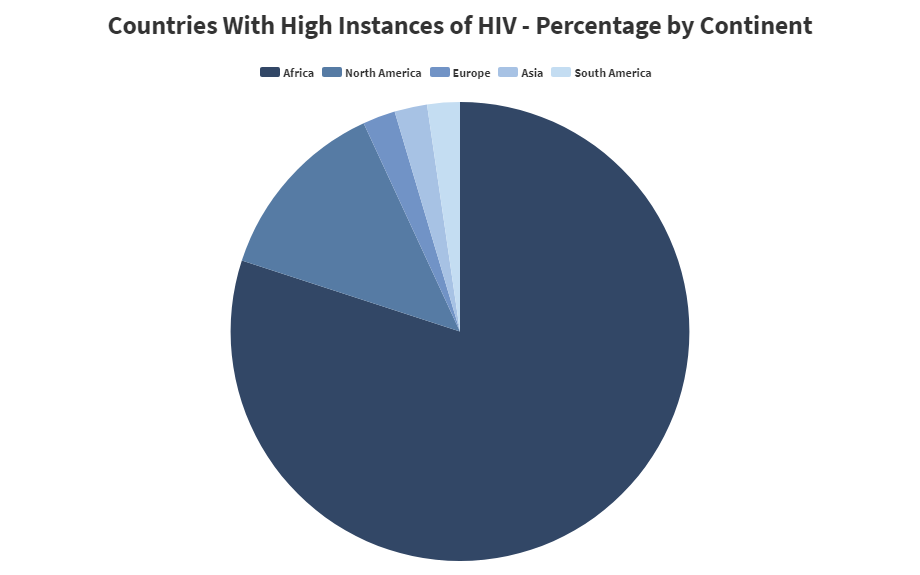 In 12 of these high-risk areas that don’t offer PrEP, homosexuality is illegal. Given that men that have sex with men (MSM) are at greater risk of acquiring HIV than many other groups, criminalising homosexuality could indeed influence governments into not providing the preventative drug. As it turns out, there are many more places in the world that criminalise homosexuality – in fact, it’s illegal in 70 countries recognised by the UN or 30% of the world, and a majority of these places don't offer a PrEP program for citizens.

Broken down into continents, the statistics are as follows:

As you can see, Africa, Asia & the Middle East, North America and Oceania have more countries that criminalise homosexuality than countries that offer PrEP. However, South America bucks the trend with a higher proportion of countries offering PrEP, whilst Europe is the only continent that has no countries criminalising homosexuality. 47% of Europe currently has some form of PrEP program in place.

A large portion of the world (37%) don’t criminalise homosexuality, but also don’t provide a PrEP program for citizens, 11 of which are high-risk countries that need the support from the government to reduce new instances of HIV.

As well as looking at the data from PrEPwatch, we decided to look at the 10 countries with the highest search volumes for PrEP and Truvada (the branded version) to see where the drug is most in demand. This was done by searching for Google Trends and looking at the top 10 results for each search term. Countries that aren’t recognised by the UN are omitted from the results in the interest data entry. As well as looking at which countries were searching the most for these terms, we also looked at the continent they belong to and whether each country had a PrEP program in place.

The results are as follows: 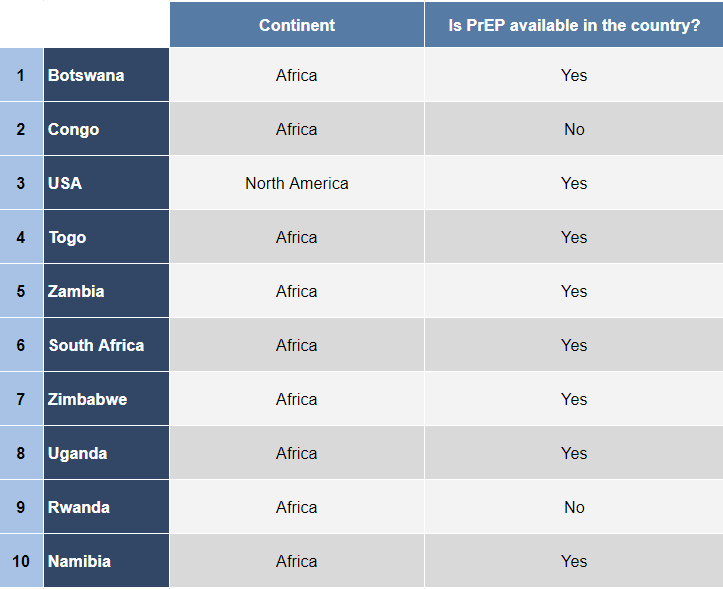 A vast majority of countries searching for Truvada are in Africa, with it being available in all but two of the countries – Rwanda and the Republic of the Congo. Both of these places are in the list of countries that have been found to have high instances of HIV. 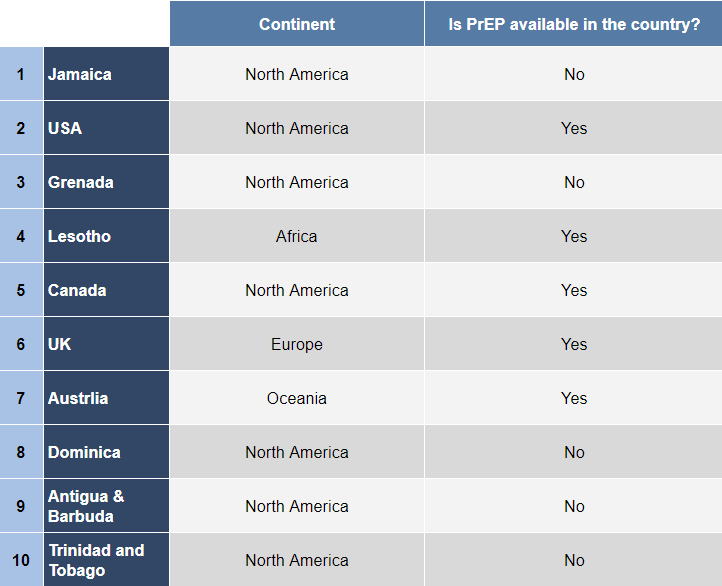 The results from the PrEP search are more mixed, with a majority of searches coming from North America. PrEP is available in 50% of the countries, whilst the other 50% don’t have a PrEP program in place for residents, including Jamaica, Grenada, Dominica, Antigua & Barbuda, and Trinidad and Tobago.  Two of these countries, Jamaica and Trinidad and Tobago, have high instances of HIV, and in four out of five of the countries that don’t offer a PrEP program, homosexuality is illegal.

The fact that citizens are searching for the medicine suggests that there are people in need of it that aren’t able to easily access it, most likely wondering how to get PrEP. This can cause problems in itself, as without PrEP, HIV has a much higher chance of being transmitted.

Let’s focus on PrEP availability closer to home. We looked at the UK and the countries within it to see how easily accessible the drug is for those that need it. Whilst you’d think the same rules would apply in England, Northern Ireland, Scotland and Wales, each country has its own PrEP program, and not all of them are run in the same way.

PrEP was licenced in 2012 for the prevention of HIV, but until 2017, those that needed it in the UK had to seek a private prescription as it wasn’t available for free through the NHS. However, this changed when each country started to implement a PrEP program.

PrEP in Scotland is fairly easily accessible. Since July 2017, the government have supplied the drug to anyone that’s deemed as being at high risk of acquiring HIV. PrEP is free of charge in Scotland to all that can prove their Scottish residence. There are no restrictions as to how many people can access it – they just need to be considered at risk of acquisition.

Wales launched the PrEPARED in Wales program in 2017, which makes PrEP available for free to all that meet certain criteria. The numbers aren’t capped, so anyone that needs PrEP is able to access it fairly easily, provided that they’re over 18 and a resident of Wales. They must also fit one or more of the following criteria (from www.iwantprepnow.co.uk)

Northern Ireland’s PrEP program is available to all residents that meet assessment criteria. Assessment clinics are available all over NI, but patients that are accepted on to the program must be able to attend reviews every 3 months in the capital, Belfast. Whilst this might mean that it isn’t as accessible as Scotland and Wales to some Northern Irish residents, it’s still an uncapped program where anyone that meets the criteria can access the drug. According to The Rainbow Project, those seeking PrEP in Northern Ireland must:

In addition to these, people applying for PrEP in Northern Ireland will also need to fit one or more of the same criteria as Wales.

Interestingly, PrEP in England is less accessible than PrEP in other countries that make up the UK. The NHS introduced the IMPACT trial in 2017, but numbers were capped at 13,000. Since then, the trial has been doubled to accept 26,000 people, but many are still being turned away due to their nearest clinic having no availability.

Health Secretary, Matt Hancock, pledged to end HIV transmissions in the UK by 2030, but once the IMPACT trial ends, those receiving the drug for free will need to source a private prescription until it becomes available on the NHS. A month’s supply of PrEP can cost £50 when sourced privately, which will likely be too expensive for low earners or those without much disposable income. Because of this, many turn to unregulated and dangerous sources from overseas, having to buy PrEP that hasn’t gone through testing and could contain harmful substances, or not enough of the drug to protect them. To put an end to this, it’s important that the NHS makes PrEP more easily available – something which our patients agree with. 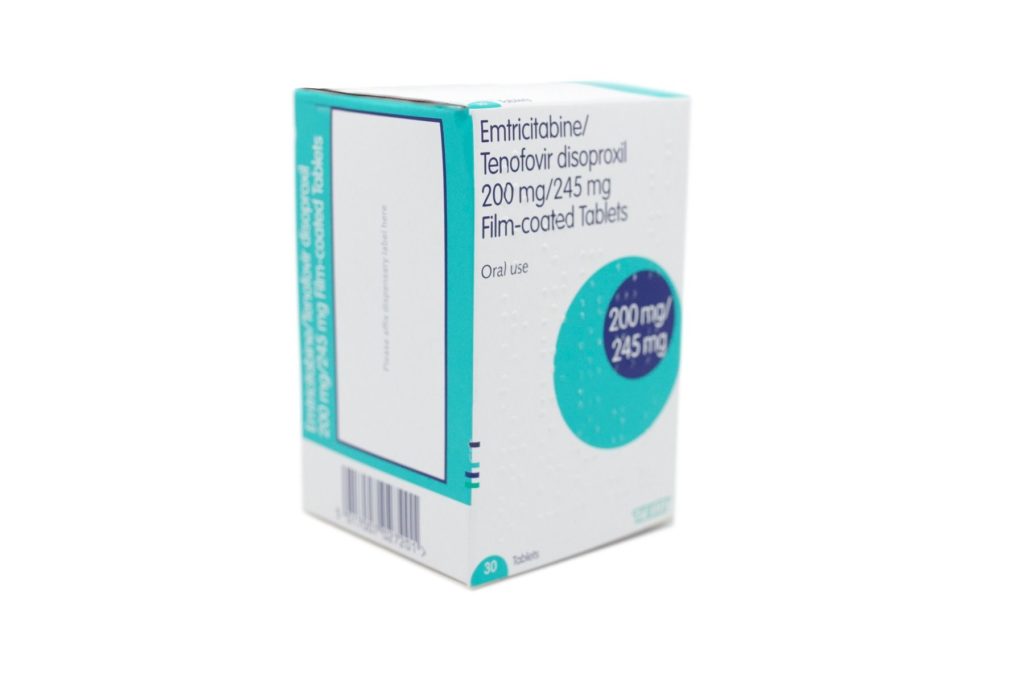 All respondents were aged between 20-64, lived in England, and were male. Here’s a summary of the survey results:

Doctor4U has worked to make PrEP as accessible as possible on private prescription, which is especially important for those that can’t secure a place on the IMPACT trial. It’s also important to note that the Terrence Higgins Trust has started the Mags Portman PrEP Access Fund for those that can’t afford to buy PrEP privately.

How effective is PrEP?

Those that are thinking of starting the preventative drug will probably ask "How effective is PrEP?". It's important to know how protected you'll be whilst taking the medication to determine which dosage method is best for your lifestyle. No matter which method you use, for PrEP to reach maximum effectiveness, it must be taken for 4-7 days before you plan on having unprotected sex with someone that has a detectable viral load or an unknown HIV status.

PrEP facts have stated the following effectiveness for PrEP:

The way you take PrEP will depend on your lifestyle. For example, if you have sex several times a week, taking one pill daily is probably the best method for you, as you'll have maximum protection. However, if you have sex less frequently, there are other ways of taking the drug, which is outlined in our PrEP page, as well as much more information about the drug.