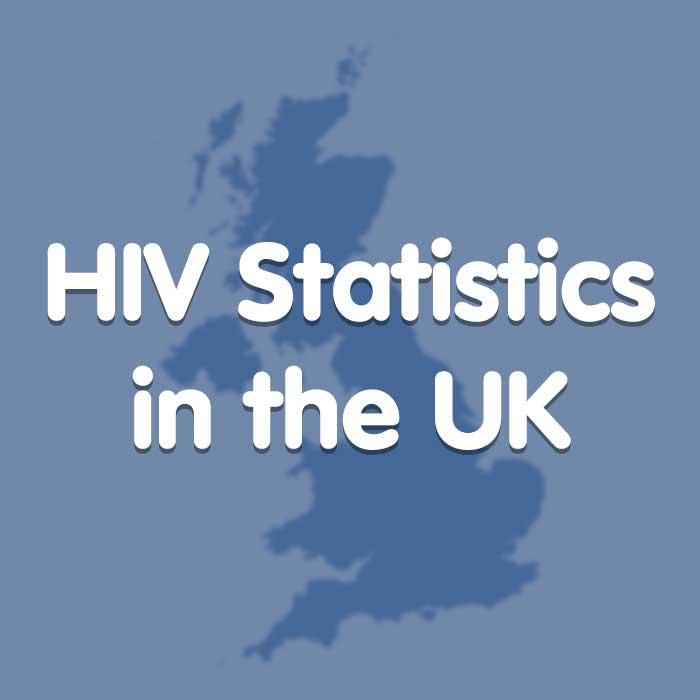 On 03/09/2019, Public Health England (PHE) published the latest data sets for HIV trends. These included figures from the beginning of January 2018 to the end of December 2018, as well as the trends for previous years, dating back to 2009.

Whilst we were unable to analyse the data in terms of upper-tier local authorities (UTLA) as we did in last year's analysis, we were still able to have a look at the results regionally, and build a picture of how HIV in England has changed over the last year.

As we saw from the data available to us in 2017, new diagnoses of HIV in England have been consistently falling for the past decade or so, and 2018 was predicted to follow the trend, especially with the implementation of the PrEP IMPACT trial nationwide in 2017.

Well, we can reveal that the predictions were correct, and new diagnoses of HIV fell by 6% in 2018, which translates to 223 fewer new cases of the virus than there were in 2017 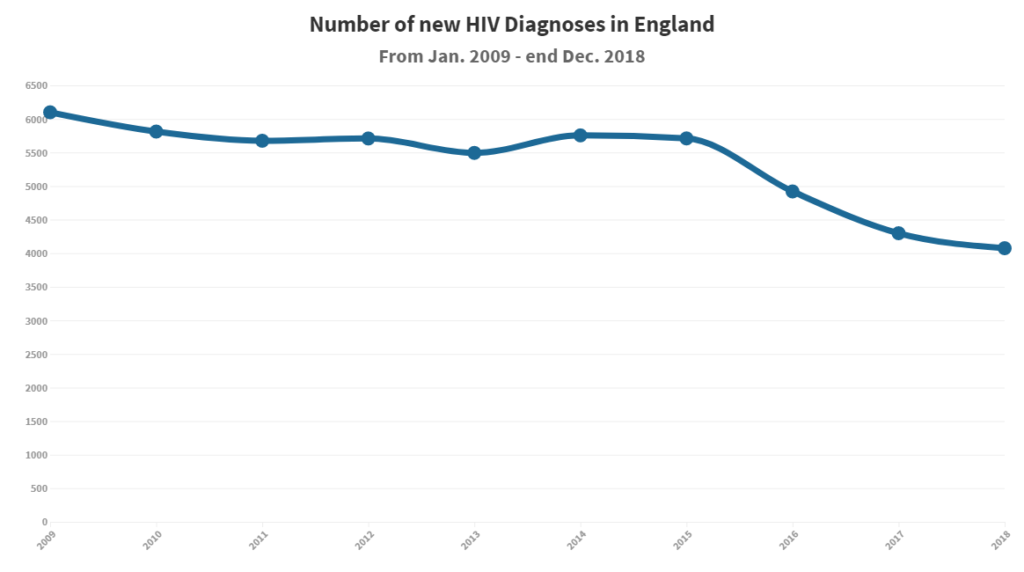 When comparing 2018’s data to 2009, it's promising to know that new diagnoses of HIV have fallen by 34%, meaning that cases have fallen by over a third in the last 10 years.

This is fantastic to see, especially with the pledge to end HIV in the UK by 2030 in mind, but whilst this decrease is encouraging, is it enough to set a precedent for the next decade?

If the trend continues as it has done over the next 10 years, in 2029, there will be roughly 2,600 new HIV diagnoses, which unfortunately still isn’t enough to reach the 0% target. In fact, for Matt Hancock’s promise to end HIV by 2030 to be at all likely, figures need to decrease by 50% each year between now and 2029. In other words, from 2019 onwards, it’s essential for the number of new diagnoses to halve year on year to meet the requirements by the 2030 deadline.

Whilst the 6% decrease is still a step in the right direction, more must be done to prevent HIV, such as getting rid of the cap on the impact trial, or by making PrEP routinely available on the NHS.

As we were able to look at the regional data, we decided to compare the 2017 statistics to the new tables from 2018. We found that London was still the region with the newest HIV diagnoses, and the North East retained its record of the fewest new cases, with a massive difference of 1,399 cases between the two regions. In fact, 36.9% of the entire country’s diagnoses were in London, with the rest being spread out amongst the other regions in England. However, when we take population into account, we can work out the density of diagnoses, which tell a different story to the graph above.

According to Statista, population data for each region in England for 2018 is as follows: 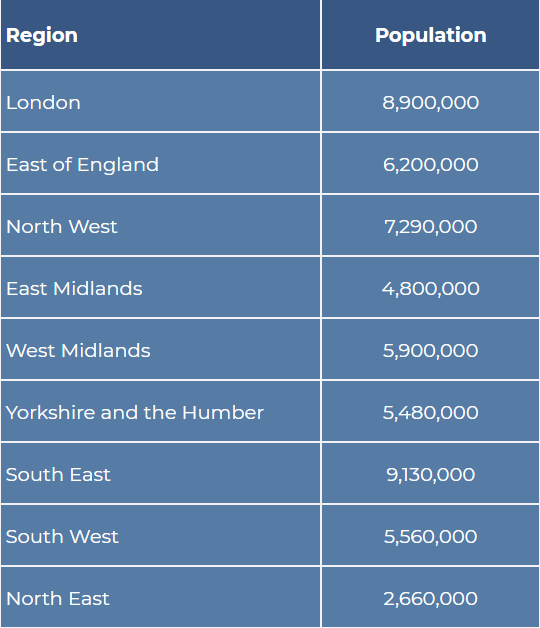 To find the density of HIV in England for different regions, we divided the population number in each area by the corresponding number of new HIV diagnoses. For ease of analysis, we then rounded the results to their nearest whole number. When looking at density, it’s important to understand that the lower the number is, the higher the HIV rates are. For example, the population of London is 8.9 million, and the number of new HIV diagnoses in the region in 2018 was 1504, meaning the density is 5917. In other words, according to average statistics, every 1 in 5,917 people in London was diagnosed with HIV in 2018. The rest of the results are: 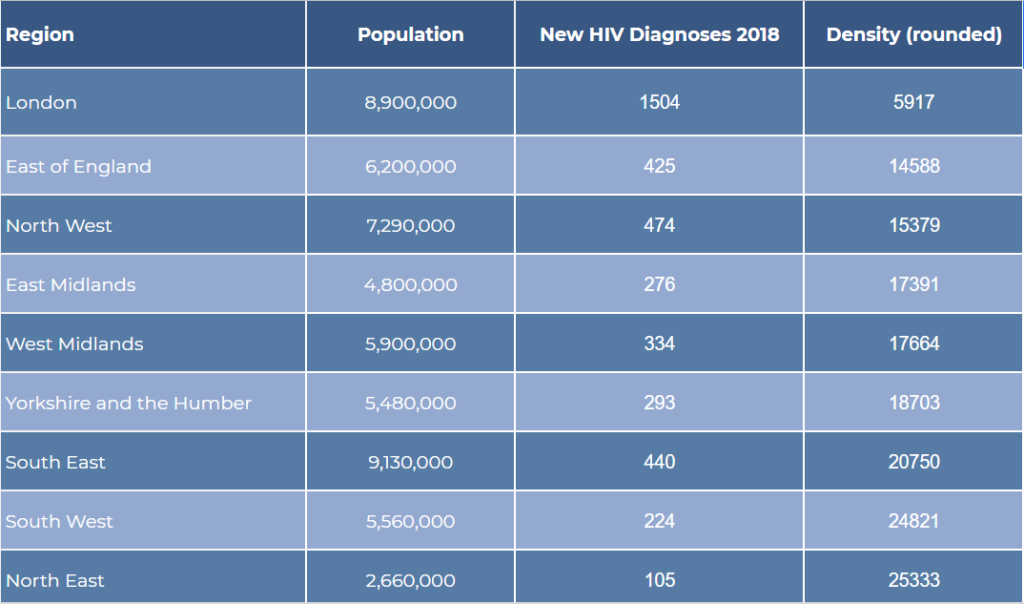 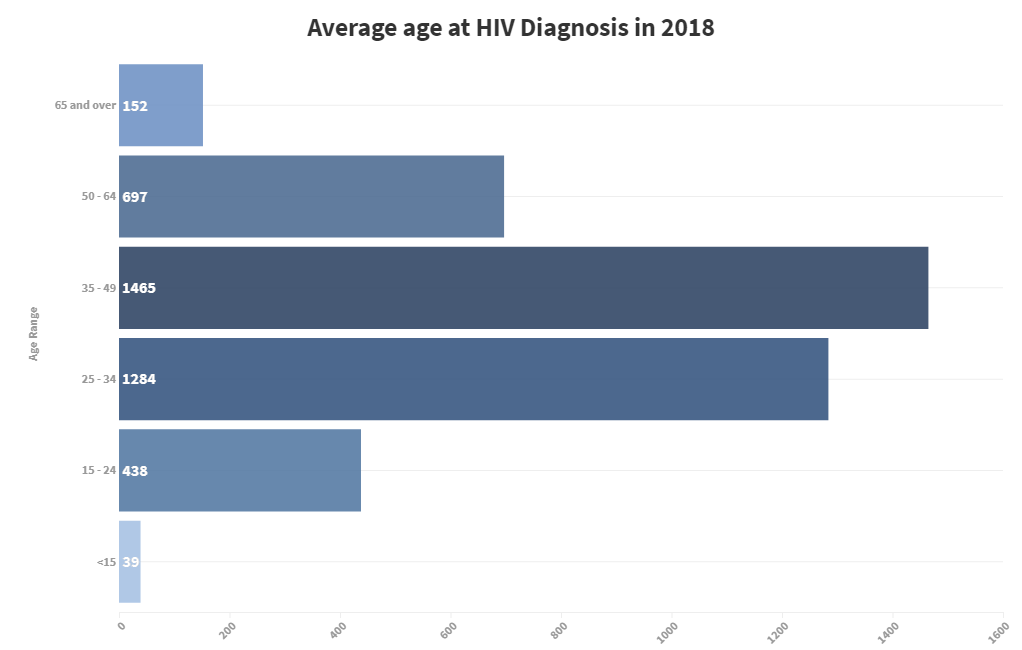 As you can see by the graph, the least number of diagnoses was found in those under the age of 15, with only 39 new HIV cases in 2018. Projections from Public Health England showed that an estimated 54 children may have contracted HIV during birth, so it’s a possibility that the 39 that were diagnosed under the age of 15 contracted the virus during birth. However, there’s also a possibility that underage sex or illegal drug use may also play a part in this statistic.

Although the average national age bracket for new diagnoses sits between 35-47, The North East’s average for 2018 was lower than the rest of the country, with a majority of those diagnosed in the region last year being aged between 25-34. Other than this anomaly, all other regions largely followed the same pattern.

When looking at the average at diagnosis from 2009-2018, it's clear that the statistics follow the same pattern, with the age range of 35-49 being the most common age for HIV diagnosis.

The latest data sets provided statistics for the amount of HIV+ individuals that have passed away since 2009, however, this doesn't mean that the death was caused by HIV or AIDS and related complications.

Deaths of those with HIV have been gradually declining since 2009, but 2018’s data showed the largest decrease in mortalities so far, with 88 fewer deaths than 2017, translating to a 40% reduction.

As well as having one of the largest decreases since 2016, 2018 holds the record for the lowest amount of HIV+ deaths in England ever, with a total of 148. 59% of these were in London (88), though this could be explained by the large density of HIV diagnosis figures in the region. 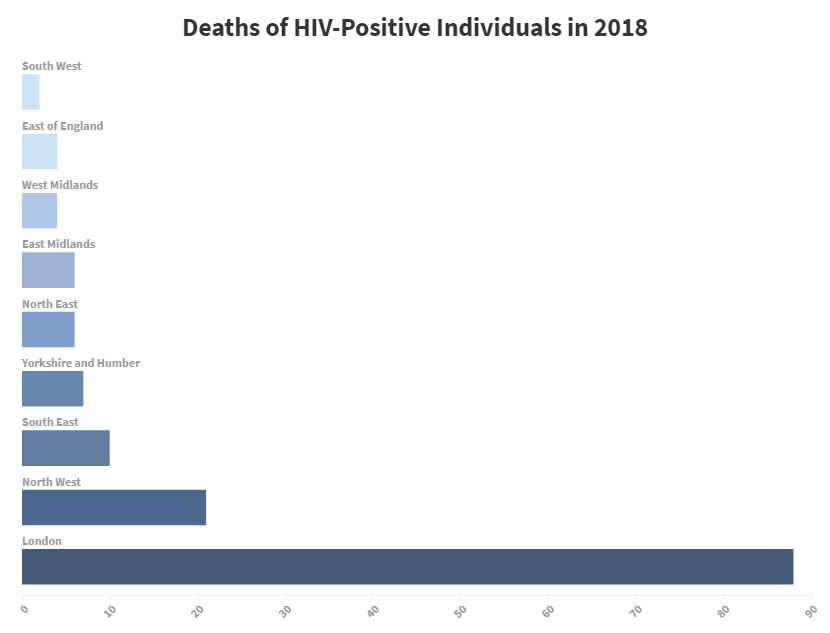 The East of England and the West Midlands both had a 92% decrease in deaths of HIV+ people since 2009, whilst the South West wasn’t too far behind with a 90% decline.

The North East only had a 54% decline, but it’s worth noting that they also had the lowest figures to begin with, so their declining percentage will always be lower due to the fact that they have fewer deaths to reduce.

The amount of people receiving HIV care (antiretroviral therapy) has been steadily increasing throughout the years, with a 32% increase in patients since 2009. 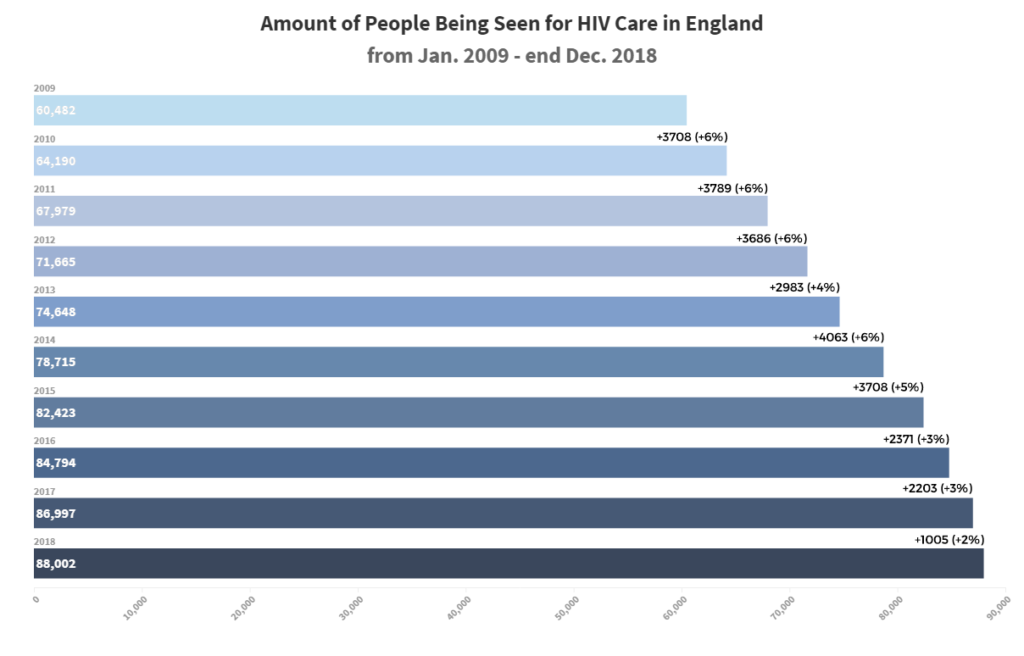 However, despite the number of patients increasing year on year, we’re actually experiencing a decreasing percentage of people receiving the treatment.

For example, 2010 showed a 6% increase in patients to 2009, whilst 2018 only had a 2% increase compared to 2017. This has been gradually declining throughout the last decade and may suggest that fewer people each year are needing to seek treatment for HIV. The kind of treatment discussed in the PHE report includes antiretroviral (ART) medication for HIV+ people, and doesn't encompass those that are currently taking place in the PrEP impact trial. There could be several reasons for the gradually declining percentage of people being treated for HIV, but given the implementation of the IMPACT trial in 2017, this might explain the trend. 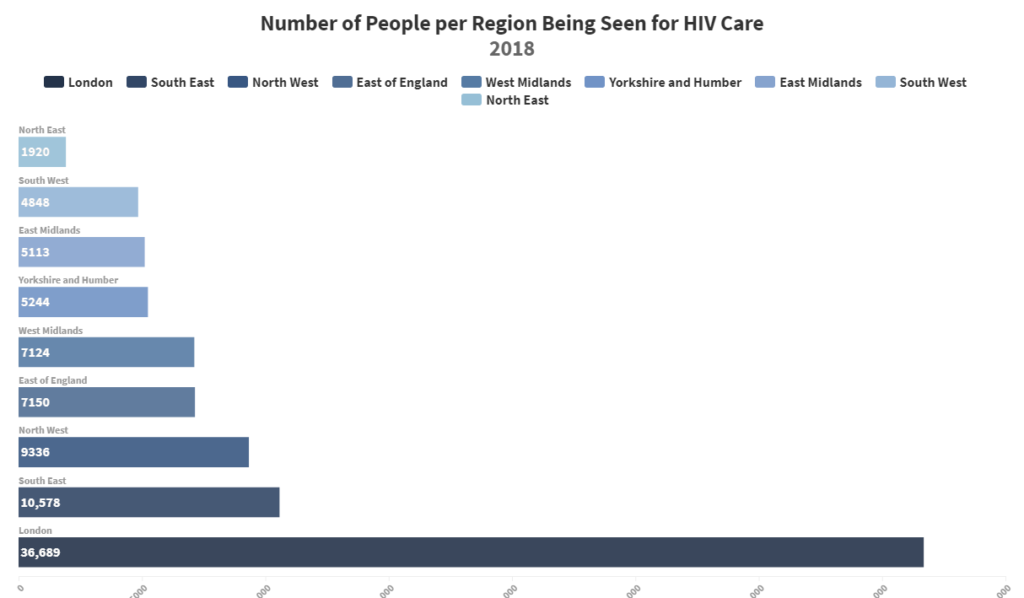 We've seen that the figures for new diagnoses have fallen once again, which is great news! It means that fewer people year on year are being diagnosed with human immunodeficiency virus (HIV), but at the moment, we're miles away from being on target - that target being 0 new diagnoses in England by 2030.

So what needs to happen for us to halve these figures year on year? It's often said that prevention is better than a cure, and luckily, HIV prevention is available in the form of PrEP - pre-exposure prophylaxis. Currently, trials are being carried out throughout the UK to determine whether PrEP is an effective preventative drug. In Scotland, Wales, and Northern Ireland, the trials are uncapped, meaning that PrEP is available to anyone that needs it. However, England's trial is capped at 26,000 places, which was only doubled earlier in 2019 after it was revealed that many people were being turned away from the initiative due to having no available spaces.

PrEP is over 90% effective at preventing HIV as it contains two antiretroviral drugs that are usually used to treat HIV+ people. However, instead of treating the virus after it's been contracted, PrEP stops it from taking hold of any cells, effectively fighting any trace of HIV before it has a chance to enter your body.

With current statistics, it's clear that on average, new HIV diagnoses need to fall by 50% each year to reach 0 before 2030, and making PrEP routinely available on the NHS may be the key to this, but some are concerned about the cost of PrEP and the impact that could have on the NHS.

Although PrEP isn't routinely available on the NHS, Truvada (the branded version of PrEP) is outlined in the NHS drug tariff, which as of September 2019, states that Truvada costs £355.73 for each prescription of a 30-day supply, bringing the total yearly cost for each person on PrEP to  £4268.76. Whilst this may sound like a lot of money, it's worth noting that generic versions of the same medicine are available, and often much cheaper than their branded counterparts, meaning that the NHS could potentially save thousands per person, per year.

The Terrence Higgins Trust state that the cost of HIV treatment (for those already diagnosed with the virus) is double this figure - costing £11,000 per patient per year.

Whilst the initial cost of PrEP on the NHS may be fairly large, it shouldn't be ignored that it could eventually save money on HIV treatment due to the fact that it prevents the virus.

Most of the NHS prescribing data is available for the public to view, and we decided to look into where costs could be cut within the public health sector to allow room for PrEP to become routinely available, and we started with items that are available in supermarkets and pharmacies without the need for a prescription. In our analysis, we included the following products:

Whilst we don't currently know the number of people that would need PrEP treatment on the NHS, the cost of prescribing items that can be bought in supermarkets or pharmacies is something that could instead go towards preventing HIV. In addition to this, once new HIV diagnoses reach zero, money that would have otherwise have been spent on post-exposure prophylaxis would also potentially offset the cost of PrEP.

Whilst it's good that the number of new diagnoses is reducing year on year, at the moment, it's simply not enough to reach the 2030 target, and more must be done to prevent HIV.