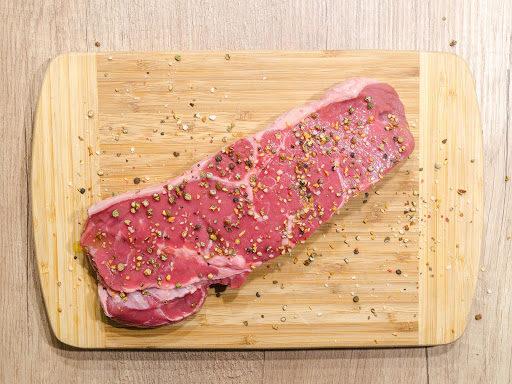 The Keto (or Ketogenic) diet has been a hot topic in the world of weight loss over the last few years. But what actually is Keto? How does it work? And is the Keto diet safe?

Put plainly, this diet promotes foods that have high-fat content such as fatty meat, cheese, and eggs, while reducing the intake of carbohydrates such as potatoes, pasta, and bread. This sends the body into a metabolic state called ‘Ketosis’ where your body burns fat instead of carbohydrates. This diet often results in significant weight loss, which explains its popularity amongst dieters. The diet has also been used for its neuroprotective qualities since the 1920s, which have been proven to reduce the frequency of seizures in children with epilepsy.

In this article, we reveal the latest Keto statistics and provide a full explanation of what exactly this diet is, what kinds of foods you can eat on Keto and what safety risks are associated with the Ketogenic diet.

In this section we take a look at some of the most recent Keto Statistics of 2020 to answer frequently asked questions about the diet such as ‘How many people do Keto?’ and ‘Does the Keto diet actually work?’.

When did the Keto diet originate?

The term ‘Ketogenic’ diet was coined by Dr. Russell Morse Wilder at the Mayo clinic in 1921. He used the term to describe the high levels of ‘ketone bodies’ that are produced in the blood when high amounts of fat and extremely low amounts of carbohydrates are consumed.

The diet was initially designed for the treatment of patients with epilepsy, with various studies being undertaken in order to document the effects of the Ketogenic diet on young people who suffered from seizures. The first study in 1925 found that the diet significantly improved 95% of young patients’ seizure control, with 60% of patients becoming entirely seizure-free.

Since then, the diet has gained popularity worldwide and has been used by many as an effective weight-loss method that encourages the body to burn fat instead of glucose.

How popular is Keto?

To find out how popular the Keto diet is worldwide, we analysed Google search results using the tool Keyword Finder. We compared the average monthly search volumes worldwide for the following 10 popular diets, and the results were as follows: 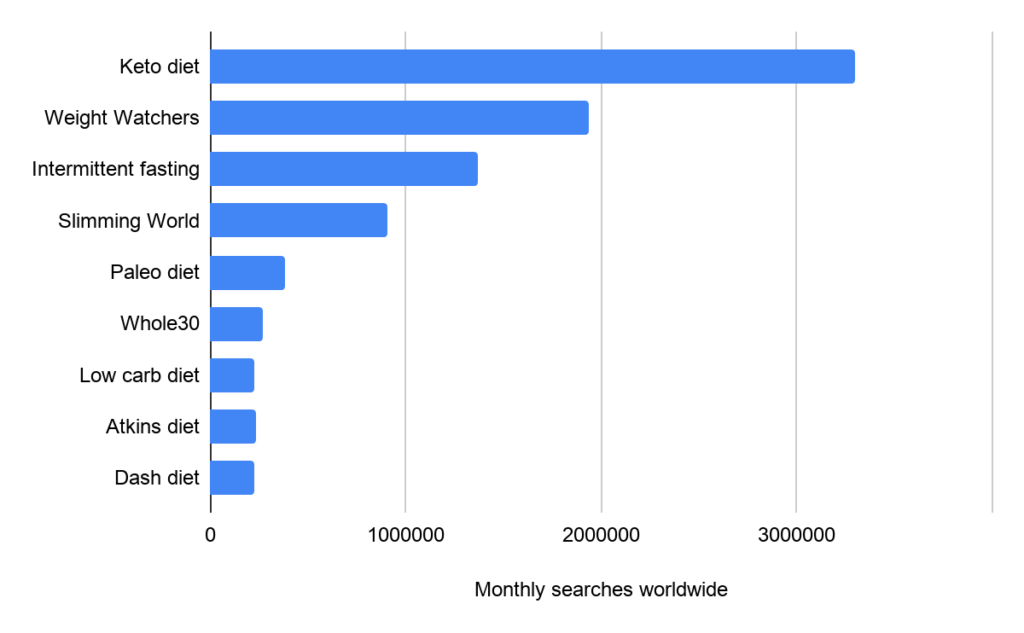 As you can see from the graph, the Keto diet is the most Googled diet of 2019, with around 3.3 million searches being made for the term ‘Keto diet’ worldwide every month.

The second most searched for diet was ‘Weight Watchers’, which is searched for 1.9 million times a month, followed by ‘Intermittent fasting’ (1.4 million monthly searches) and ‘Slimming World’ (907,000 searches a month).

Scientific studies have found mixed evidence regarding the effectiveness of the Ketogenic diet over the years. Some studies, such as a randomised trial reported in The Journal of Clinical Endocrinology & Metabolism, found that very low carbohydrate diets tend to be more effective than a low-fat diets for short-term weight loss.

However, much of the research seems to suggest that the Keto diet is not a sustainable way to lose weight. A recent trial split 609 participants into two groups: one following a low-carb diet and the other on a low-fat plan in other to compare and assess the efficacy of the two diets. After 12 months, both groups lost weight and no significant difference in weight loss was observed between those on the healthy low-fat diet and those on the healthy low-carbohydrate plan.

Nevertheless, the Ketogenic diet plan has been proven to be an effective way to lose weight, although long-term studies of the diet’s effectiveness are lacking.

In 2018, the global Keto diet market was estimated to be worth approximately £7.4 million, with predictions stating that by 2027 it’ll account for around £11.9 million of all spending.

The map below shows the Ketogenic diet food market size by region (2018), and reveals that Europe and North America have some of the biggest populations of consumers who are on the Keto diet.

As you can see from the map, areas such as South America, Africa, and the Middle East appear to show the least interest in the Keto diet as they were found to have some of the smallest market sizes for Keto related products.

What is the Keto Diet?

So now that we’ve brushed up on the latest Keto Statistics from 2020, let's take a look at the Keto diet plan itself and answer some commonly asked questions, such as ‘How many carbs can you eat per day on Keto?’.

What can you eat on Keto?

The Keto diet mostly consists of fat with limited amounts of protein and extremely restricted amounts of carbohydrates. Typically, the macro ratio for a Keto diet will consist of:

Common sources of fat that are encouraged on the Keto diet include fatty meats, high-fat dairy products, seafood, nuts, oils, and eggs.

Recommended sources of protein on this diet include leaner cuts of meat, eggs, cheese, and fish.

Although they are few and far between, the carbohydrates involved in the Keto plan include low-carb vegetables such as broccoli, celery, spinach, and green beans.

What positive effects does Ketosis have on your body?

When your body enters the state of Ketosis, your hunger levels are significantly reduced due to the high-fat content of the diet alongside the increase in ketone bodies in your system. This, alongside the appetite-stimulating hormones insulin and ghrelin, can reduce your calorie intake, therefore resulting in weight loss. Ketosis can also increase the number of calories your body is able to burn, due to the metabolic effects of converting fat and protein into glucose.

As we mentioned earlier, Ketosis can also decrease the frequency of seizures in people with Epilepsy, which is likely to have a positive effect on their quality of life.

Is Keto a healthy diet plan?

Much deliberation has taken place with regard to the safety and sustainability of the Ketogenic diet plan over the last few years. Heath and Nutrition experts around the world have commented on the dangers and risks associated with the Keto diet, with recent reports suggesting that the diet may increase the risk of heart disease. This is due to Keto dieters’ tendencies to eat foods high in saturated fat such as red meat and butter, which can contribute to the risk of cardiovascular disease.

Experts now also regard Keto as being one of the least sustainable diet plans. It’s strict rules and the elimination of such large food groups make the diet extremely difficult to follow, particularly in the long term.

If you have struggled to stick to diets in the past or find that dieting is not giving you the results you desire, then the medication route may be a better option for you. If you choose to try weight loss medication, it’s very important that you get your weight loss drugs from a fully regulated doctor to ensure that the products you obtain are both safe and effective. Doctor 4 U stock a wide variety of MHRA approved weight loss medications that are prescribed by our team of experienced online doctors and your medication can be delivered to your door without the need for a face to face consultation.

We hope this introduction to the Keto diet has provided you with everything you need to know about this eating plan. Remember, before starting any diet or new medication it’s important that you speak to your doctor who will be able to advise you on whether or not they are suitable for you.