Antiviral medicines can be used to shorten the duration and severity of a flu virus, or to prevent more severe complications relating to the virus. Generally, antivirals will be prescribed to help those in at risk groups to deal with the flu virus. These groups include anyone over 65, anyone who is pregnant, anyone with a weakened immune system, anyone with diabetes and anyone with a disease that affects their organs.

Antivirals stop the flu virus from breeding within the body. As such, they won’t cure the flu, but they will stop it from lasting as long and relieve some of the symptoms. They have also been found to be effective in preventing death in patients who’ve been hospitalised with the flu.

Below are some common types of flu-antivirals. Please note, this is not an exhaustive list and other non-medical methods or lifestyle changes may be more suitable. If you would like to learn more about these options, then please click here. Before receiving medication you must answer a number of questions to asses your suitability. All questions are reviewed by a GMC registered doctor before a final decision is made. All medication is dispensed via a full regulated and registered UK pharmacy. All prices displayed on our site include the price of the medication and our doctors consultation fee. 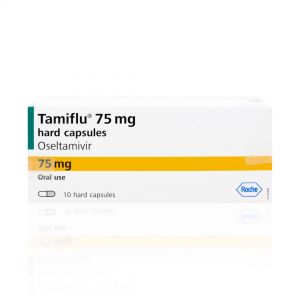 "Mild cases of flu can be treated just with paracetamol, ibuprofen and plenty of fluids and rest. More serious cases which have the potential to lead to complicated health problems such as pneumonia may need to be treated with antiviral medication. Flu antivirals are an effective way of preventing serious complications of flu and reducing the severity and duration of symptoms. If you’re an at risk patient you should also ensure you are vaccinated against the virus to prevent catching it."

Commonly known as flu, influenza is a viral infection that is highly contagious and causes a respiratory illness. In most cases flu is a mild illness and recovery can be made within a week, however, for some people the illness can be more severe and even fatal, particularly for vulnerable people with health problems. Symptoms are often mistaken for the common cold but symptoms of flu will usually come on much quicker than the cold and are more severe. Symptoms of flu include:

There are many strains of the flu virus with new ones evolving every few years. Vaccinations are given out before each flu season which runs from December to March to protect against these strains of influenza. There are also remedies to help reduce the symptoms and shorten the duration of flu if you were to catch it. Keeping warm and rested will help with your recovery as well as drinking plenty of fluids and taking medication such as paracetamol and ibuprofen to ease aches and pains. Flu antivirals are also prescribed to treat flu.

What are flu antivirals?

Antiviral drugs are prescribed medication used to treat viral infections. As flu is a virus, antiviral drugs are the best medication to treat this illness as opposed to antibiotics which can only treat bacterial infections. Antivirals stop the flu virus from reproducing and multiplying and can therefore work to prevent flu or stop it in its tracks and shorten the duration. This is why it’s important to take flu antivirals within the first 48 hours of illness, however, this medication can still be effective at a later stage of the illness, particularly if you’re at risk of complications.

Antiviral medication is most effective when it is taken at an early stage of flu and it can significantly reduce the severity of the symptoms and make recovery time much quicker. Antivirals should not replace flu vaccination as a more effective preventative medication, but it is, however, an effective way of preventing the complications of this illness, particularly for those who are at high risk of developing complications.

What are the complications of flu?

Flu usually clears up on its own without any complications, but it can sometimes lead to hospitalisation. Flu can develop into other health conditions such as sinusitis, bronchitis and pneumonia which can be fatal. Pneumonia is an infection of the lungs and has similar symptoms of flu but also with shaking, coughing up green, yellow or bloody mucus, chest pain, sweating, and lips and fingernails turning blue. When pneumonia symptoms turn severe this can be life threatening and will need urgent medical attention. Flu can also cause dehydration and worsen existing health conditions such as heart and lung disease, asthma, diabetes and problems with the central nervous system.

Who is at risk of developing complications of flu?

Some people are at a higher risk of developing these health problems as a result of contracting flu which include the very old and the very young as well as:

If anyone in these categories contract flu they are more likely to be hospitalised with influenza or a serious complication of this virus such as pneumonia or sepsis. Flu antiviral medication will be prescribed to those who are admitted to hospital with a severe case of flu to minimise their risk of developing complications and preventing fatalities.

What type of flu antiviral medication is available?

Tamiflu is a common flu antiviral drug used to prevent the outbreak of flu by treating the infection and limiting the spread. Tamiflu contains the active ingredient oseltamivir which inhibits the replication of the influenza virus. Tamiflu can be taken when there has been an outbreak of flu in the community to prevent the spread, and also to treat acute symptoms of flu. Before taking this medication you should consult with one of our online doctors to ensure you are suitable to take Tamiflu. There are some side effects of Tamiflu such as sickness and stomach ache, and this drug may interact with other medication that you may be taking.

You can buy Tamiflu online as long as you are deemed suitable to take it by one of our GMC registered doctors.