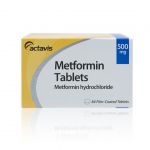 Metformin is a medicine that’s most commonly used to treat and manage type 2 diabetes mellitus. However, it can also be used to prevent the onset of type 2 diabetes in people that are at risk of developing it, and it’s often used as an off-label treatment for polycystic ovary syndrome (PCOS). Using medicines off-label is perfectly legal, it just means that the prescriber wants to use it for something other than what it’s licensed for. To read more about off-label prescribing, please read these government guidelines

Metformin works by lowering blood glucose and insulin levels, both of which are usually higher than normal in patients with type 2 diabetes, prediabetes, and PCOS.

Metformin isn’t a substitute for a healthy diet and exercise. In fact, it works much better when used in conjunction with these lifestyle changes, as it’s able to work to its full potential. Metformin is only usually prescribed when diet and exercise alone haven’t helped to relieve symptoms and blood glucose levels are still high.

It’s generally advised that metformin should be taken with food to reduce the severity of side effects such as diarrhoea, nausea, and bloating, though these often disappear within a few weeks of starting treatment.

Dr Diana Gall graduated from medical school in 2005 and has since undertaken further intensive training in many different areas of medicine. Dr Diana has reached consultant level and has practiced medicine all over Europe.

How does metformin work

Insulin resistance is a common problem with those that have prediabetes and PCOS, and can mean that the body isn’t able to process glucose properly. Insulin’s main job is to help the cells in the body to process glucose and use it for energy or store it as body fat, but when you have insulin resistance, the cells aren’t able to do this. This can lead to high levels of glucose in the blood as it isn’t being absorbed properly. When this happens, the pancreas works overtime creating more insulin so that the glucose can be used properly. This can be dangerous, as eventually, the pancreas can become damaged and end up not producing enough insulin, causing blood glucose levels to rise again.

However, if the problem is found soon enough, metformin can be an extremely effective treatment, lowering both blood glucose and insulin levels. It does this by reducing the amount of glucose that the liver releases and helps the body respond better to insulin. When the body responds properly to insulin, the pancreas produces less of it, therefore lowering the amount of it in your body and increasing your sensitivity to it. In turn, this can improve and in some cases, reverse insulin resistance.

Metformin’s main use is to treat and manage type 2 diabetes mellitus – a condition where the body doesn’t produce enough insulin or when it can’t use it properly, meaning that blood glucose levels can be dangerously high. By lowering the amount of glucose that the liver releases and improving the way the body responds to the insulin that’s produced, it can help to reduce blood sugar and bring it to a normal level.

Metformin works in the same way to prevent diabetes in patients that are at risk of developing it. These include people that have been diagnosed with insulin resistance or pre-diabetes, where blood sugar levels are elevated but not at a level that can be classed as diabetes.

Metformin is also commonly used to treat PCOS, despite not being licenced for it. This is because many women with PCOS also suffer with insulin resistance, as the two conditions are very closely linked. Insulin resistance can worsen certain symptoms of PCOS and even lead to an increased amount of androgens (male hormones), so the use of metformin can often help in these cases. With PCOS, metformin is also known to stimulate ovulation and encourage regular menstrual cycles.

Lowering blood glucose and insulin levels can help with weight loss in some cases, as the sugar that comes from food can be properly used or stored. Losing weight can in turn help to reduce the amount of male hormones that the body produces – something that causes several issues in women with PCOS.

Whilst metformin isn’t licenced for the treatment of PCOS, it can be prescribed off-label if your doctor thinks that it can help with the condition, and the use of metformin for PCOS is acknowledged on the BNF website, and on the NHS page about treatment for the condition. Off-label use is perfectly legal, and it happens when a prescriber wants to use a medicine for something other than what it’s licenced for. However, as it isn’t an official use of the drug, your doctor isn’t obligated to prescribe it to you.

Metformin is one of the most commonly used drugs for type 2 diabetes mellitus, and has been proven to effectively prevent the onset of it in patients that are classed as being at risk of developing it. Because of the widespread usage and the fact that it’s well-tolerated, metformin is usually very safe to take. However, as with all prescription medicines, there are certain people that should take extra care or avoid metformin completely until they’ve seen their own doctor. These include people that have:

If you have any of the above conditions or problems, you shouldn’t buy metformin and should instead see your doctor for advice on what treatment options are available for you.

There are also some medicines that might interact with metformin, which could have dangerous consequences. If you take any of the following, you should also avoid metformin until your doctor has advised you on dosage or alternative options:

If you aren’t sure if you take any of these, please make a list of your current medicines and ask your local pharmacist to check whether any of them may interact with metformin.

If you don’t take any of these medicines, and have none of the health issues listed above, metformin should be a safe and effective treatment for you.

Metformin is generally very well-tolerated, and the main side effects tend to be gastrointestinal. Some people don’t experience any symptoms at all, whilst others may have a bad experience with the drug, in which case, a slow release version is available to reduce the risk of side effects.

Some of the most commonly reported side effects of metformin include:

Most people that experience these symptoms find that they subside within a few weeks of treatment once they’ve adjusted to the drug, but as with any medicine, if you find that the side effects outweigh the benefits, you should speak to your doctor about stopping treatment and finding an alternative that suits you.

The standard metformin dosage for PCOS is as follows:

500mg once daily for the first week

500mg three times a day from then on.

It’s usually recommended that metformin is taken with meals to reduce the risk of gastrointestinal side effects. Most people take it in the morning with their breakfast in the first week, and then the second dose with their evening meal in the second week. After this, it’s a good idea to take metformin with each meal, which can also help you get into a routine, making you less likely to forget a dose.

Metformin may help with weight loss, but shouldn’t be used solely for this purpose. It’s thought to work by helping with appetite reduction as a side effect of lower insulin levels.

Insulin can work in the brain to cause hunger, meaning that people with higher than normal levels of the hormone may feel hungrier. As metformin’s job is to lower blood glucose and insulin levels, patients taking it may have a reduced appetite as a result.

However, metformin isn’t a weight loss drug, and should still be used alongside a healthy diet and exercise. Eating well when you have PCOS means that you should be choosing plenty of fruits and vegetables as well as opting for whole grain versions of pasta, rice and bread instead of the refined white options. Making sure you eat plenty of protein can also make sure that you stay fuller for longer, meaning that you shouldn’t want to eat as often.

Metformin is available on the NHS for all indications outlined. However, only those that have been diagnosed with type 2 diabetes will receive it for free.

If you’re being prescribed metformin to prevent T2D, or to treat PCOS, you’ll need to pay the standard NHS prescription charge.

Some doctors may be reluctant to prescribe metformin for PCOS due to it being an off-label use of the medicine, so if you find that this is the case, it may be worth asking for a referral to an endocrinologist, or seeing another doctor for a second opinion.

If you want to buy metformin privately, you can do so from private doctors as well as reputable online prescribing services such as Doctor4U.

If you buy metformin or any other prescription medicine online, you should always check for a clickable logo that says “click to verify if this website is operating legally”. Ours can be found on the footer of our website on every page. Clicking on it will take you to our credentials on the MHRA site (the government regulating body for medicines and healthcare products). This means that we’re licenced to sell medicines within the UK, and that we’re regulated according to the same standards as any bricks and mortar GP.

It's safe, easy, and perfectly legal to buy metformin online through Doctor4U.