Dysmenorrhoea describes a condition where a woman suffers with severe period pain.

Whilst some menstrual cramping is normal to experience during your period, excessive or severe pain isn’t. If you often experience excruciating pain during or just before your period, there’s a good chance you might be suffering with dysmenorrhoea.

The good news is that it isn’t serious or life threatening, and rarely poses a cause for concern, but the symptoms can be debilitating, leading many women with the condition missing school, work, or their normal activities due to the level of pain they experience.

Dysmenorrhoea is usually treated with anti-inflammatory medications such as ibuprofen and naproxen, though your doctor may also suggest using hormonal contraceptives if you don’t want to conceive. These methods can either reduce or stop your extremely painful periods, helping many sufferers to live a normal life. 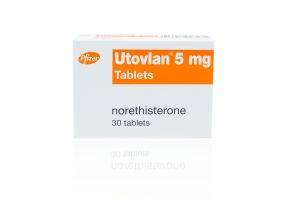 ""Dysmenorrhoea can be awful for women to live with. Experiencing severe period pain each month can interfere with daily life and can even cause mental health issues. If you’re in a lot of pain each time you start your period, please visit your GP who can advise you on treatment. You don’t have to suffer.""

Dysmenorrhoea (commonly known as painful periods) is a term that describes very painful periods. Whilst it’s normal many women do experience some discomfort and pain during a certain point in the menstrual cycle, the pain that is experienced in women with dysmenorrhoea can be described as severe period pain.

Dysmenorrhoea isn’t life-threatening, but it can be life-altering, especially for women who are usually active but are stopped from enjoying their normal activities due to the pain they experience.

There are two types of dysmenorrhoea; primary and secondary. They are classified as:

Primary dysmenorrhoea can often be down to prostaglandins that are made in the lining of the uterus. These cause the muscles to contract, causing painful cramps. With secondary dysmenorrhoea, the three most common causes are:

What are the symptoms of dysmenorrhoea?

Mostly, you’ll experience painful periods. Due to pain being subjective, you might first think that you have a low tolerance threshold, but you know your own body and if you’re struggling with severe period pain, visit your doctor for advice on treatment. Alongside painful periods, you might also experience:

If your type of dysmenorrhoea is secondary, you might also notice symptoms such as:

Like many conditions, the symptoms of dysmenorrhoea can mimic other conditions, so your GP might send you for tests and scans to rule out any other possible causes for your severe period pain, for example, polycystic ovary syndrome and certain cancers.

With primary dysmenorrhoea, it’s worth knowing that symptoms can last from anywhere between 8 hours to 3 days, and is usually accompanied by (or shortly followed by) a menstrual bleed. For women with secondary dysmenorrhoea, symptoms are more unpredictable and may not indicate that you’re about to start your period. Symptoms (especially pain) can happen at any point of your cycle.

These symptoms can also cause mental health issues due to how debilitating they can be. Many women struggling from the condition feel that they can’t do normal activities due to the severe period pain and accompanying symptoms. Depending on how they feel, some may even have to miss work or school due to the condition.

In most pharmacies and even supermarkets, period pain relief medicines are sold to women. For some with dysmenorrhoea, these OTC drugs might be enough to alleviate the debilitating pain, but for many, extremely painful periods need prescription medication:

What are the risk factors for dysmenorrhoea?

Some women are more likely than others to experience extremely painful periods. Risk factors for developing dysmenorrhoea include:

Whilst dysmenorrhoea can’t always be prevented, choosing a healthy lifestyle such as not smoking, exercising, maintaining a healthy weight, and learning techniques to deal with stress are all good ideas to try and reduce your risk of severe period pain.

Will my painful periods get easier?

Over time, it’s highly likely that the pain will diminish. You might not be completely free of pain until you go through the menopause, but studies have shown that the severity of pain is reduced with age. Younger women are more likely to experience extremely painful periods, especially if they started menstruating before the age of 12.