Premature ejaculation is the most common type of sexual problem men experience. It is more common in younger men, and is associated with short-term problems such as stress or performance anxiety, especially when in a new relationship or experiencing relationship problems. Very occasionally it is because of a physical problem, but it usually has emotional and psychological roots. Often this pattern can be broken by speaking to a trained sex therapist or taking CBT (cognitive behavioural therapy) sessions. However, there is also medication in the form of both tablets and cream to help prevent this problem, as sometimes it is purely a case of the penis being oversensitive.

Although it may feel embarrassing to talk about, you should speak to your doctor about your worries and they can help you get the best premature ejaculation treatment. Remember that they were trained professional you will be up to help you best, and the more open and honest you are the quicker they can help you. If talking to a therapist or your partner doesn't help manage your premature ejaculation, pills or an anaesthetic cream may be able to help you. You can buy the treatment online from a UK doctor.

Below are some common medicines often used to treat premature ejaculation. Please note, this is not an exhaustive list and other non-medical, lifestyle changes may be more suitable. If you would like to learn more about these options, then please click here. Before receiving medication you must answer a number of questions to assess your suitability. All questions are reviewed by a GMC registered doctor before a final decision is made on whether to give a prescription. All medication which you can buy online from our website is dispensed via a fully regulated and registered UK pharmacy. All prices displayed on our site include the price of the medication and our doctors consultation fee.

Please note: These treatments can only be prescribed to males. If you’re ordering any treatment from this section from a female’s account, your order will be declined by our doctors for patient safety reasons. Please make sure that all orders come from the account of the patient who will be taking this medication. 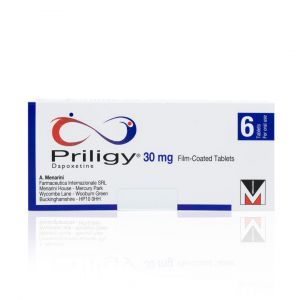 "Premature ejaculation is the most common form of sexual dysfunction which affects men. Ending on the course, it can be resolved either by using a talking therapy, cognitive behavioural therapy, or medication. You may wish to use a type of anaesthetic cream which numbs the penis, use a thick condom to reduced sensation, or take a medicine such as a SSRI, which can increase the time it takes for you to ejaculate. You can buy Priligy only, which is a type of Dapoxetine, especially designed to help men manage their ejaculation problems."

Premature Ejaculation in a Nutshell

Premature ejaculation is the name of a condition which causes men to ejaculate quicker than planned during sexual intercourse. It is the most common type of sexual problem which men can experience.

There is no strict definition for how long sex between partners should last, but a study involving 500 couples found that the average time for ejaculation was about five-and-a-half minutes after starting sex. Generally, a man is considered to have experienced premature ejaculation if it happens before penetration or less than two minutes after penetration during intercourse.

If your ejaculation time is causing distress on a persistent basis, then there are numerous treatments which you can consider which have proven effective for many patients. Though premature ejaculation is not a life-threatening condition, it can potentially lead to psychological issues such as low self-esteem, feelings of depression and anxiety.

How common is premature ejaculation?

It is very common for men to have occasional experiences of premature ejaculation. It can be a sign of a short term problem such as anxiety, stress, drinking too much alcohol or inflammation of the prostate gland.

If you have experienced premature ejaculation before but only on the odd occasion, then it’s not likely something you have to be too concerned about. It’s only if the problem has begun happening frequently or proven a lifelong issue that you should look more closely at the causes and treatments.

Premature ejaculation can be caused by dozens of factors and some of them may disappear on their own. On occasions, it can be an indicator of an underlying illness, and if that's the case it’s worth talking to your doctor about it.

Even if there is no underlying illness, it is still worth speaking to your doctor or GP if premature ejaculation is a frequent issue for you. You may find it an embarrassing subject to speak about, but your doctor will be trained to speak about it with you. The more they know, the easier it will be to identify the cause and the most effective treatment for your issue.

Underlying illnesses and certain other physical factors are common causes of premature ejaculation. These include but are not limited to the following:

Certain psychological or emotional factors can affect how long you can have sexual intercourse before ejaculation occurs. These may be short term and easily resolved, or they could be more permanently ingrained if they have been a part of your life for a long time. Emotional and psychological issues which can cause premature ejaculation include the following:

What are the most effective premature ejaculation treatments on the market?

The most effective way of treating premature ejaculation depends on whether the issue is caused by psychological or physical factors (or both). That’s why it’s so useful to talk to your doctor or GP about the issue if you’re experiencing it, since they’ll be able to help identify the specific reasons and the best solutions to respond to them.

It may be an embarrassing or uncomfortable topic to talk about in detail, but nothing you say to your doctor or GP will be shared with anyone else. They are used to dealing with these kind of problems on a near daily basis. Being as honest as possible will help you get the correct solution as quickly as possible.

Medicines have been created which are specifically designed to prevent premature ejaculation from occurring in men who are having trouble with this condition. Some of these treatments can be bought from pharmacies including Doctor-4-U with a prescription.

If premature ejaculation is occurring due to having an overly sensitive penis, then you could be prescribed a medicinal cream or spray designed to reduce sensation in this area and delay ejaculation.

Examples include Fortacin and STUD 100, which are both sprays that have proven effective in delaying ejaculation during intercourse. Sprays such as these (known as delay sprays) contain topical anaesthetics and the contents are sprayed directly on the penis before sex to provide a longer-lasting experience.

Certain medicines which can be taken to ease mental illness can also help you with premature ejaculation, even if you do not have depression. These anti-depressants are known as SSRIs (selective serotonin reuptake inhibitors) and they can potentially be used to help with sexual and urological problems as well as depression.

One particularly noteworthy example of such medication is Priligy, a tablet medication which contains dapoxetine. Priligy and similar medicines won’t be the most suitable solution for everyone, but such treatment can be very effective if premature ejaculation is linked to psychological factors.

Can you treat it without medication?

Some causes of premature ejaculation can be solved yourself without needing medication but by using certain self-help preventative techniques instead. Techniques you could consider include the following:

If you believe your problem with premature ejaculation is psychological, you may benefit from speaking to a therapist. If it’s possible that relationship problems or performance anxiety are the source of your troubles, then an honest conversation with your partner or visiting a couples therapist could help you to overcome these difficulties.

If you think some level of trauma in your childhood or teenage years may have contributed to your struggles, then a trauma therapist may be able to help with your problems. An open conversation with your partner is always a good place to start though.

More generalised (not sex specific) anxiety, stress or depression may be considered a factor, in which case your doctor may still recommend speaking to a counsellor therapist or they could suggest a different course of action.

Can you get treatment for premature ejaculation without visiting your GP?

If medicinal treatment is considered the most appropriate course of action, then you can get a prescription for such a thing without needing to see your GP. You can visit an online medication provider such as Doctor-4-U in order to get your premature ejaculation treatment sent to you in discreet packaging.

While you won’t need to see your GP to complete an order from us, you will be required to answer a number of questions to assess your suitability. All questions are reviewed by a GMC registered doctor before a final decision is made on whether to approve your order. If the order is approved, then your medication will be dispensed from a fully regulated and registered UK pharmacy.

Other types of ejaculation problems

There are other sexual problems which men can potentially experience which are related specifically to ejaculation. These include the following: