PrEP is a HIV preventative drug taken by people who are at risk of being diagnosed with the virus. It blocks HIV from entering cells and establishing within your body, meaning that it has the potential to drastically reduce the risk of having the virus.

The success rate of PrEP is around 90% when used to prevent sexually transmitted HIV.

PrEP is only to be taken by HIV-negative people, though similar drugs are also used to treat those who are HIV positive, but in this case you’ll need to see your doctor for advice.

PrEP only protects against HIV, and is even more effective when used with condoms. It isn’t currently available on the NHS, but it’s perfectly legal to buy PrEP online for personal use. However, make sure you’re buying from a reputable company such as Doctor4U, as some websites are providing unregulated medication. 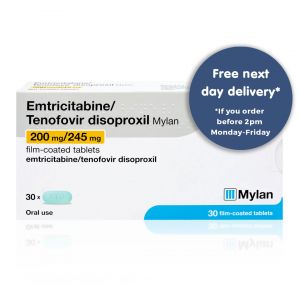 "PrEP is a groundbreaking step forward in eradicating HIV. By stopping the virus from taking hold in your body, it makes sure that you stay HIV-negative despite the status of your partner/s. It needs to be taken for around a week before it reaches its full potential for HIV prevention, but after this point, it has been proven to be 90% effective at stopping sexually transmitted HIV."

PrEP stands for pre-exposure prophylaxis, and is a drug that can prevent HIV. Many people will know the branded version, Truvada, though generic alternatives made to the same standard are available. The active ingredients are tenovofir and emtricitabine, which work together to block the virus from entering cells and reproducing, meaning that someone who’d otherwise be at risk of being diagnosed HIV-positive would likely stay HIV-negative. The same drugs are also used to treat people who’ve already been diagnosed with HIV, and can in some cases make the virus undetectable, meaning that the risk of passing it on is far lower.

HIV stands for human immunodeficiency virus, and affects you by attacking the immune system, leaving you more vulnerable to infections and diseases. HIV can lead to AIDS if it goes untreated, which can be life-threatening.

There’s currently no cure for HIV, but medical advances mean that diagnosed patients can be treated with drugs that reduce the viral load, often making HIV undetectable. Most people that are treated early enough can live completely normal lives and otherwise be healthy.

The idea behind PrEP is to lower the risk of HIV in people who would usually be vulnerable to getting the virus. For example, those that have multiple sexual partners of positive or unknown HIV status without using barrier methods such as condoms.

How does PrEP work?

PrEP works because the antiretroviral drugs in the medication stop HIV from entering cells in the body and multiplying, meaning that someone with negative HIV status would likely remain that way despite having a HIV-positive partner.

Studies have shown that PrEP is around 90% effective at preventing sexually transmitted HIV, and around 70% successful in drug users who inject. These results were measured in people that took PrEP daily to protect against HIV, as the drug builds up in your system to prevent the affected cells from establishing.

It’s important to know that PrEP only protects against HIV, so won’t prevent you from getting other STIs such as chlamydia, gonorrhoea and syphilis.

Who can take PrEP?

It’s currently recommended for people who are at risk of becoming HIV positive. For example, lifestyle factors can play a part, such as having unprotected sex with partners of a positive or unknown HIV status. PrEP isn’t necessary for those who do practice safe sex and use barrier methods. PrEP isn’t a replacement for condoms, as it can’t protect against other STIs such as chlamydia, gonorrhoea, and syphilis.

Does PrEP protect you straight away?

At the moment, it’s recommended that you take PrEP for 4-7 days to make sure there’s enough of the drug in your system to block any potential HIV cells, so the medicine might not reach its full potential until after this time.

Many people take PrEP daily for as long as they’re at risk, though there are other methods of use, such as on-demand-dosing, taking PrEP 4 times a week, and using it temporarily when unprotected sex is expected (such as on holiday or during certain times). More information about this is available on the PrEP medication page.

Where can I get PrEP?

If you live in Scotland or Northern Ireland, you can get PrEP on the NHS at most sexual health clinics after a chat with a nurse. Wales are also doing a 3 year pilot with unlimited spaces, so you’ll be able to get PrEP there until around summer 2020.

Unfortunately, if you live in England your options are limited. The government is currently running a PrEP impact trial, which as of January 2019 has been expanded to allow more people to trial the drug. As the drug isn’t available on NHS England, your other option is to buy PrEP online, but take care when ordering, as some sites provide unregulated and potentially dangerous copies of the drug. Always make sure that the website you buy from displays their MHRA and GPC credentials.

Doctor4U was the first service in England to supply the medication to people in need, and is still available through us. If you decide to buy PrEP online through our website, you’ll be asked to complete a medical questionnaire to make sure that it’s appropriate for you.

Can I take PrEP if I already have HIV?

Unfortunately, PrEP can’t get rid of HIV if you’ve already been diagnosed with it, but if it’s been less than 72 hours since your exposure to the virus, you should be able to access PEP, short for post-exposure prophylaxis. This is usually taken over the course of a month and can reduce the chances of HIV establishing itself in your body.

Otherwise, your condition can be managed with similar drugs that can reduce the viral load of HIV, but you’ll need to speak to your GP about this.

I’m not sure if I have HIV or not, can I take PrEP?

To take PrEP, you’ll first need a full STI screening and a test to see if you’re HIV positive. PrEP is only to be used by people who haven’t got HIV, so visiting your GP to request these tests is essential before you decide to buy PrEP online.