Rosacea is a common skin condition that affects the face. In more advances cases, it can also spread to the forehead, neck and chest. The first symptoms of rosacea usually start with flushing, where the central area of the face appears red. You may also experience a burning sensation along with this. Initially, the flushing will disappear after a few moments, but as the condition progresses, it can become permanent, with blood vessels dilating and becoming visible. Symptoms can subside and also flare up, making it a relapsing condition.

Rosacea is currently treated with a range of medications depending on the severity of the condition and suitability of the drug. Topical creams and ointments are available, as well as oral antibiotics in the tetracycline family. Although the causes of the condition aren’t understood yet, antibiotics such as doxycycline and oxytetraclycine have proven effective at reducing the symptoms.

The condition can be triggered by certain things such as stress, hot drinks, and extreme weather temperatures. Patients are advised to avoid their triggers wherever possible in order to manage their symptoms as well as they can. 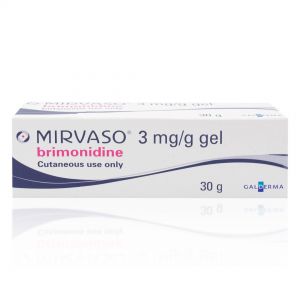 "Rosacea is a fairly common skin condition that makes the face appear flushed and red. Blood vessels tend to dilate and become visible, and sufferers may also experience uncomfortable sensations in affected areas such as burning and stinging. Whilst it isn’t life threatening, it can be embarrassing and cause distress for those who live with it. Luckily, antibiotics in the tetracycline family have proven effective at reducing symptoms."

Rosacea is a long-term (chronic) skin condition that mainly affects the face. It’s most common in fair-skinned people between the ages of 40-60, but can affect anyone of any age. It’s found more often in women, but when it does affect men, they can experience it more severely.

Rosacea normally affects the central parts of the face first, but if the condition progresses, it can spread to the forehead, neck and chest areas. It often requires lifelong treatment due to it being a chronic condition, but as rosacea is a relapsing condition (symptoms can periodically improve and worsen), there may be times when you don’t need any treatment at all.

What are the symptoms of rosacea?

People that struggle with rosacea normally notice flushing of the skin as one of the first symptoms. This is where skin in the central area of the face becomes red for a short time, but as the condition progresses, this flushed appearance can become permanent.

After the initial flushing, you may notice that you also experience:

Although spots may make you think of acne, the two conditions have several differences. For example, the skin of someone with acne is often oily or greasy, with blackheads appearing in pores. In someone with rosacea, however, the skin is more likely to be dry and peeling.

If you’re a male with rosacea, you may find that the skin around your nose thickens (a condition called rhinophyma) and changes its shape to be more bulbous. Whilst a few women may find it happens to them, this symptom of rosacea is almost exclusive to men.

The cause, or even causes of rosacea aren’t fully understood yet, but there are a few theories as to what might make people more prone to developing the condition.

Whilst the cause of rosacea hasn’t been decided yet, one thing that has been determined is the fact that certain triggers do tend to make the condition worse. These are usually things such as:

A majority of the factors listed above seem to have some sort of link to the temperature of your skin or body. For example, hot or cold weather and hot drinks. Where the menopause is concerned, it’s fairly common for women to experience hot flushes which may contribute to the onset of rosacea. Finding out what your triggers are if the first step towards alleviating your symptoms so you know what you should avoid if you struggle with the condition.

Rosacea has been proven to respond well to antibiotics, specifically tetracycline antibiotics. However, most GPs and dermatologists will generally ask you to try a topical cream or gel as a first-line treatment before looking at prescribing antibiotics. This is likely due to the risks that taking antibiotics on a long-term basis can carry. One example of an effective topical medication is metronidazole cream which is applied to the problem area for several weeks.

Other topical treatments can include emollients, but these must be used with care and caution due to the fact that they are often paraffin based and highly flammable.

If your doctor decides that tetracycline antibiotics are the right route of treatment for you, you’ll usually be prescribed a course of 4-6 weeks’ worth of medication, but if your symptoms persist, your doctor may decide to extend your treatment or even prescribe a long-term low dose of doxycycline.

If your rosacea doesn’t respond to antibiotics, or if your condition worsens, there are other avenues of treatment that you may be able to try, as well as some self-care methods to reduce your symptoms organically.

How common is rosacea?

Rosacea is fairly common skin condition. You’ve probably met someone in your lifetime who’s been diagnosed with it. Unfortunately, due to the characteristics of rosacea, it appears similar to the skin of those who excessively drink alcohol, meaning that many people with the condition may be mistaken for alcoholics. Because of this, some sufferers choose to mask the appearance of red skin with green-tinted makeup (though if your skin is sensitive because of rosacea, this may not be advisable).

Several well-known celebrities have been reported to have rosacea, such as Cameron Diaz, Renee Zellweger, Prince William and Sam Smith to name a few.

Can rosacea be cured?

There is no cure for rosacea as yet, but the treatments available are often effective at reducing the symptoms enough for sufferers to have a better quality of life. Whilst the condition isn’t life threatening, it can cause psychological and emotional distress as well as physical discomfort when rosacea symptoms flare up, so whilst it can’t be cured, current medications can help a great deal.