Cystitis is a common type of urinary tract infection (UTI) that is most often seen in women. It can be painful and unpleasant, though it isn’t usually a major cause for concern. Many cases of the infection can clear up on their own within a few days by taking paracetamol & ibuprofen and adopting a good self-care and hygiene routine, however, if the symptoms don’t subside, you may need a short course of antibiotics to treat it.

Cystitis is most commonly caused by bacteria making its way into the bladder through the urethra. These bacteria can live harmlessly in other parts of the body, such as in the colon, but as soon as it is transferred to the urinary tract, it can cause issues.

The tell-tale symptoms consist of a burning or stinging sensation when you pee, pain in the lower abdomen, and having cloudy, concentrated, or strong-smelling urine as well as feeling generally unwell. You may also feel as though you need to urinate more often than normal.

If you think you may have cystitis, it is important to treat is as soon as possible, first with home-care methods, and then with a course of antibiotics should the symptoms not subside. If left untreated, the bacteria can travel further up the urinary tract and cause a kidney infection.

Below are some common medicines often used to treat cystitis. Please note, this is not an exhaustive list and other non-medical methods or lifestyle changes may be more suitable. If you would like to learn more about these options, then please click here. Before receiving medication you must answer a number of questions to asses your suitability. All questions are reviewed by a GMC registered doctor before a final decision is made. All medication is dispensed via a full regulated and registered UK pharmacy. All prices displayed on our site include the price of the medication and our doctors consultation fee. 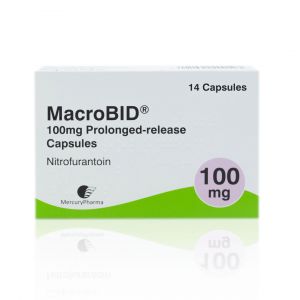 "Cystitis is a common type of UTI, and whilst it can be unpleasant, it isn’t usually a cause for concern. Many cases clear up on their own with home care and over-the-counter medication such as paracetamol and ibuprofen. Antibiotics may be required if the symptoms persist after a few days, but prompt treatment is essential to prevent it leading to a kidney infection."

It’s a common type of urinary tract infection (UTI) where the bladder becomes inflamed. It is more common for a female to suffer with cystitis due to anatomical differences. For example, it is easier for bacteria from the bowels to enter the urethra in females than it is in males due to the close proximity between the two. However, it isn’t impossible for a male to contract the infection.

UTIs are often painful, causing a burning or stinging sensation when passing urine, and causing pain in the lower abdominal area. As with many infections, you may feel generally unwell, sick, tired, and achy, though in adults, it isn’t typically common to have a high temperature, though this could indicate a kidney infection.

Cystitis is most commonly a bacterial infection, meaning that bacteria has managed to make its way to the bladder through the urethra. It’s important to treat the infection from the moment you notice any symptoms, as if it is left untreated, it can affect other parts of the urinary tract, made up of the urethra, bladder, ureters and kidneys. Should this happen, it could potentially lead to a kidney infection which is often more dangerous.

What are the symptoms of cystitis?

Although the symptoms can be unpleasant, the UTI isn’t usually a major cause for concern as long as it is treated swiftly. You may have the infection if you notice a combination of any of the following symptoms:

In the elderly, it is also common to notice confusion and agitation, though this can be difficult to spot in people with dementia or Alzheimer’s.

What are the risk factors?

As mentioned before, one of the main risk factors of contracting Cystitis is being female. However, there are also other groups of people that are more at risk than others. Age is an important factor, with infections being common in children under a year old, and in the elderly. It is more common in the elderly due to the lining of the urethra becoming shorter and thinner, making it easier for bacteria to pass through to the bladder.

People with diabetes are also more at risk of the infection due to the elevated sugar levels in the urine making an ideal environment for bacteria to multiply. As well as this, some people with diabetes struggle with fighting infections, and can also struggle to fully empty their bladder, meaning that urine is staying there for too long.

Pregnant women are more likely to suffer with cystitis due to changes in the urinary tract, making them more prone to bacterial infections.

Other risk factors include:

There are two ways in which having sex can cause a UTI: it can both introduce bacteria into the urinary tract, or particularly vigorous or frequent sex can irritate the urethra. It is important to always go to the toilet as soon as possible after intercourse to reduce your risk of contracting cystitis. If you already have the infection, it may be a good idea to avoid sex until it has cleared up to avoid further irritation.

How can I prevent cystitis?

There are some things you can’t help in terms of your risk factor of getting a UTI, for example, things like being female, having a weakened immune system, and being elderly are all aspects that you can’t change. However, the good news is that you can still take steps to prevent it.

Switching the fabric or style of your underwear can be a great start. For example, thongs pose a greater risk of infection due to close contact with colonic bacteria, making it easier to transfer to the urethra. Opting for a different style may be the way forward.

If you wear nylon, polyester, lycra or lace knickers, you’re at more risk of contracting cystitis due to the fact that these fabrics aren’t breathable and create an ideal opportunity for bacteria to breed. Opting for cotton can lower your chances of suffering with a UTI as it keeps your genital area dry and less likely to harbour bacteria.

Taking showers instead of baths could also help, as your genitals aren’t exposed to dirty water for as long, and if you’re a fan of bath bombs, these can also contribute to the likelihood of a UTI. You don’t have to ditch the bath time treats altogether, but if you struggle with regular infections, showers could help reduce recurrence.

Wiping from front to back after going to the toilet is good practice, as it means you’re less likely to be introducing colonic bacteria to the urethra.

Making sure you’re always getting plenty of fluids will make sure your urine is less concentrated and that you go to the toilet more frequently, both reducing the bladder’s exposure to bacteria.

How is cystitis treated?

This type of UTI often goes away on its own after a few days, but if you find it isn’t budging, it’s best to seek medical advice.

In the early stages, it is recommended to take over-the-counter painkillers such as paracetamol and ibuprofen to reduce pain and inflammation, as well as using some of the preventative steps mentioned above for a swift recovery.

In cases where home treatments don’t improve the condition, antibiotics are prescribed to kill the bacteria in the urinary tract and to prevent it travelling to the kidneys. You will usually be given a short course of antibiotics and it is important to finish them, even if you feel better before the treatment ends.

Antibiotics work by killing bacteria without affecting human cells, though frequent use can be counteractive as it also kills the resident friendly bacteria that your body needs to fight infections. However, if you suffer from recurrent episodes of cystitis, a doctor may prescribe a low-dose antibiotic to be taken over a longer period of time. This is often less harmful and more effective than taking several short courses at a stronger dose.

The most common antibiotic prescribed for cystitis is Trimethoprim, which is available to buy online at Doctor-4-U subject to a patient questionnaire being accepted by one of our doctors.