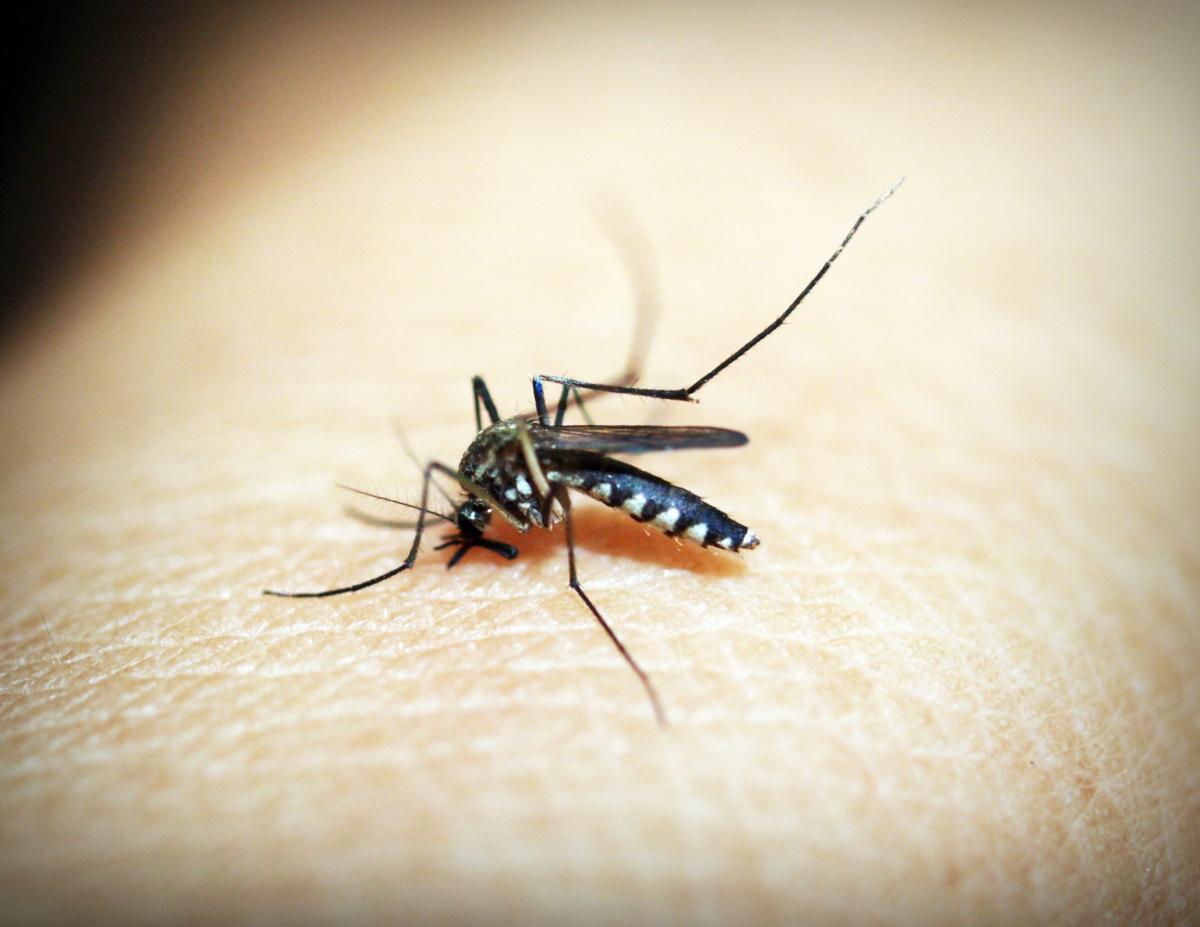 It’s World Malaria Day today, and we’ve decided to write this article to give you the low-down on the tropical disease.

Malaria was catapulted into the spotlight almost a decade ago when Cheryl Tweedy/Cole/Fernandes-Versini contracted the infection in 2010 after a visit to Tanzania. After a couple of weeks of news coverage, the story died down and we all went back to reading about whatever was popular back in 2010, occasionally taking notice of Comic Relief campaigns to provide mosquito nets for developing countries. But other than this, what do we really know about malaria? 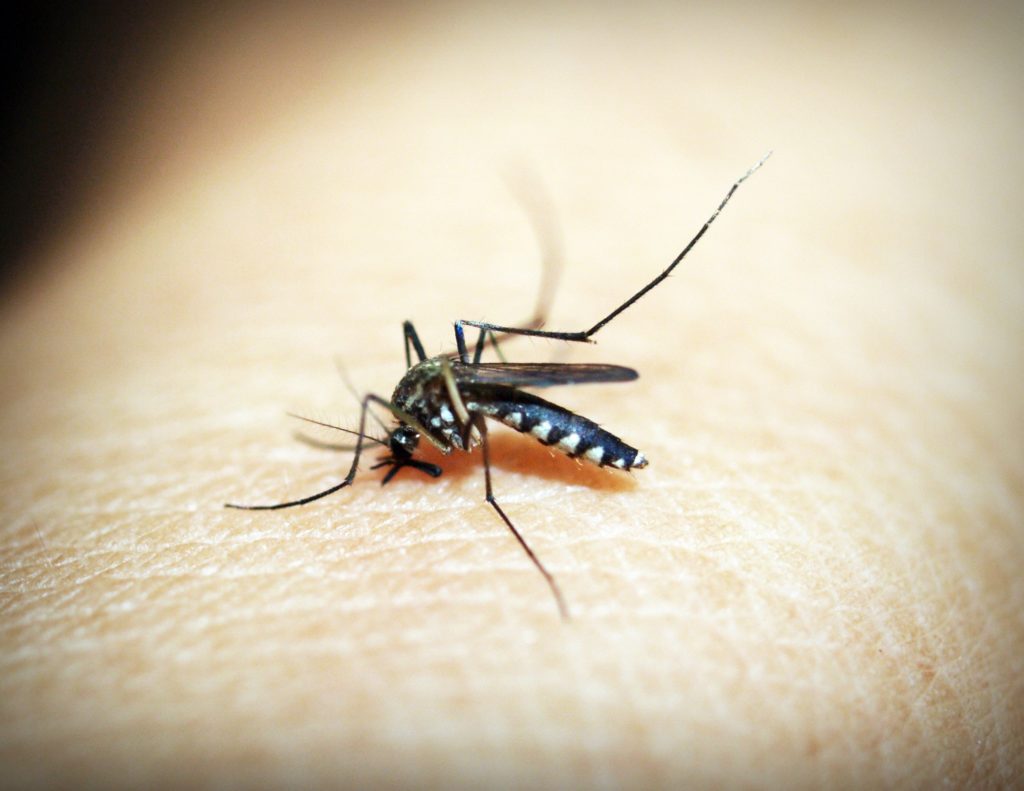 Malaria is defined as a tropical disease (so you won’t catch it if you’re sat in your back garden in Birmingham one summer evening) and can be fatal if it isn’t treated.

Malaria is transmitted via a bite from a mosquito that carries the plasmodium parasite. The only mosquitoes that carry the infection are female mosquitoes from the 'anopheles' species.
The mosquito gets the parasite from biting an infected person and then passes it to others when biting the flesh for a blood meal. At first, you might not notice a difference between a bite from an infected mosquito and a bite from one of the annoying British gnats that tend to hang around at the family BBQ, but the real differences usually begin to show within a couple of weeks.

Over 1 million people die every year from malaria, especially in countries which may not have the resources to prevent mosquito bites.  Luckily, there are charities such as Malaria No More which aim to eradicate the disease and provide vital equipment and medication to those in need. If you want to donate to their cause, please visit their website.

For those in countries such as the UK, people are only at risk if they travel to a country which has a high risk of the disease. If this is you, this blog gives you the facts as well as advice on how to help yourself. 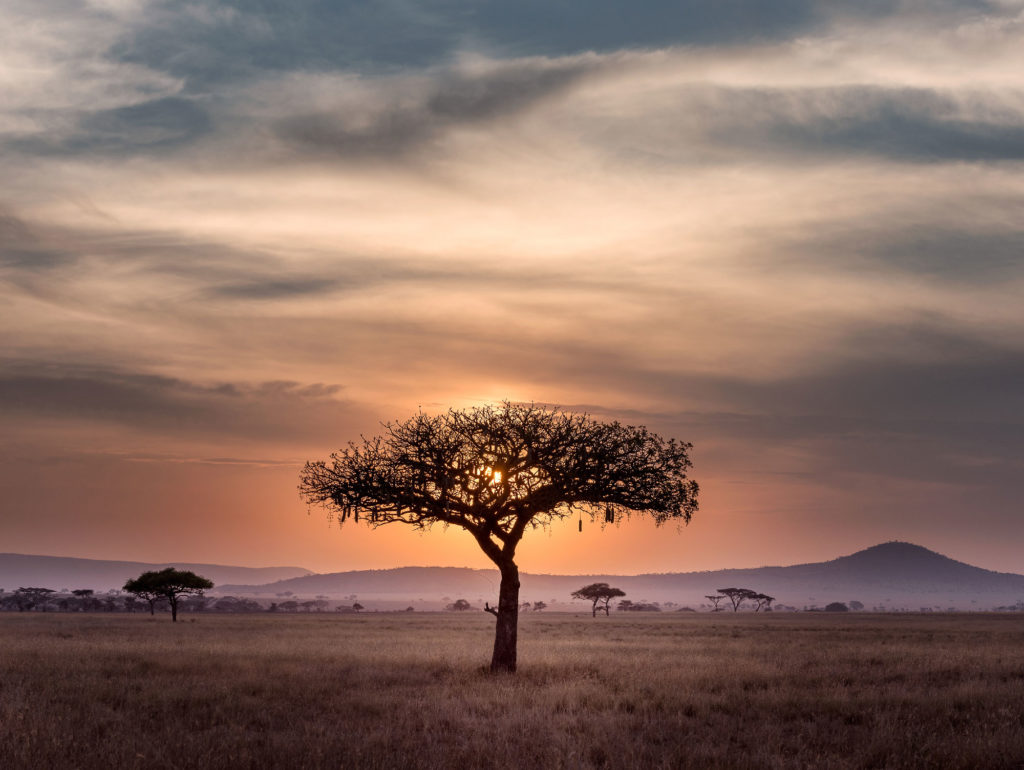 Africa is the continent with the highest risk of malaria

What are the symptoms of malaria?

Symptoms generally begin to show within 2 weeks of being bitten by an infected mosquito, but there have been some cases where it can take up to a year or more for the effects to make themselves known. The main symptoms of malaria are:

You’d be forgiven for thinking that you’d just come down with a bug, but if you’ve been abroad or to a place where there’s a risk of malaria, you’d be wise to visit your doctor and request a blood test.

Which places are at risk of malaria?

There are several countries around the world that are affected by the malaria disease, and they’re normally defined as having a low, medium, or high risk. We’ve put this map together to show you where in the world you need to take caution. 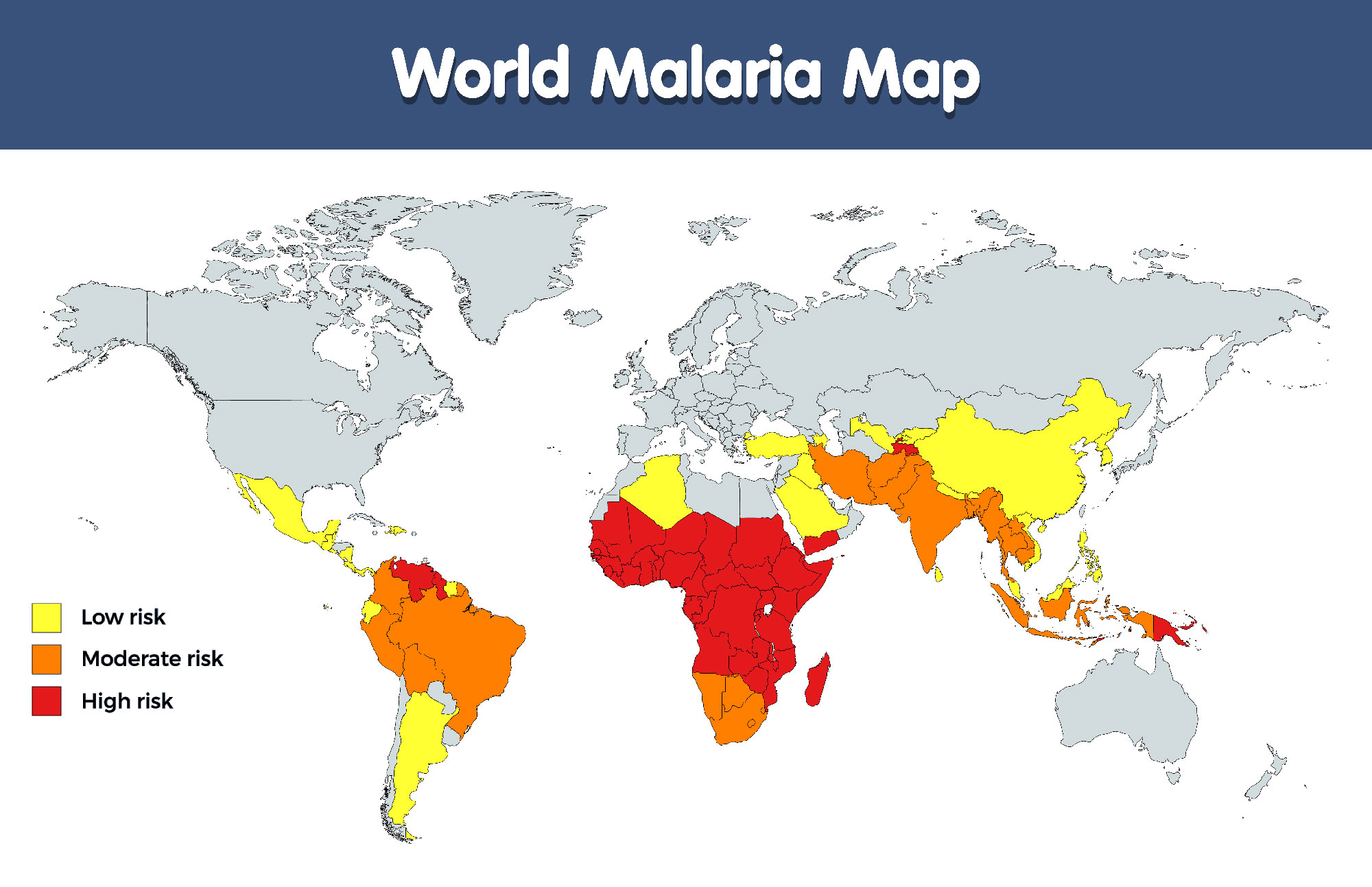 Some of the countries defined as being at medium risk might only have a few places where there’s a danger of contracting malaria, so it’s always best to tell your doctor where you’re going so they can advise you on what to do before you leave.

Can malaria be prevented?

Absolutely. If you’re travelling to a country where you may be at risk of contracting the disease, you’ll usually be prescribed antimalarial drugs. Whilst there’s no vaccine against the infection, the tablets that you take can protect you up to 90% of the time, but there are other ways to keep yourself safe from being bitten, too. 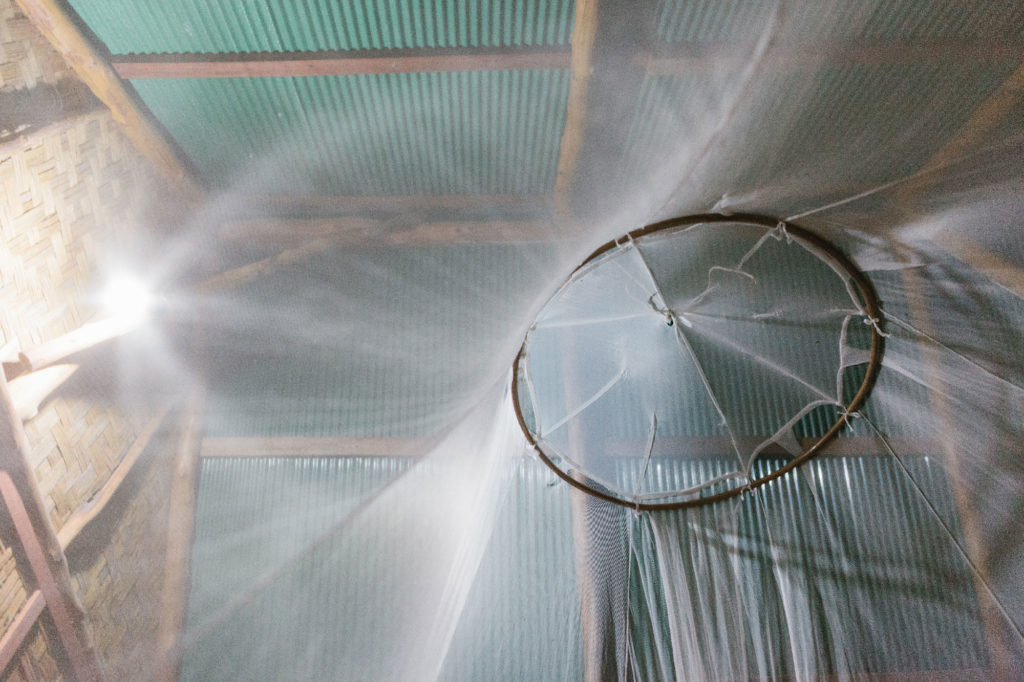 Antimalarials are drugs which help to prevent the disease from taking hold. Whilst they won’t stop you from being bitten, they can go a long way towards preventing the disease that many mosquitos carry.

Several medicines are available if you’re travelling to a high-risk country. Some of these work worldwide for preventing malaria, whilst some only work in certain areas. The type of antimalarial you take will depend on where you’re going.

Each antimalarial has different dosage instructions. Some need to be taken for a while before you leave and a while after you come back, so always check the patient information leaflet to make sure you know exactly how to take them for maximum protection. Some of the most commonly used antimalarials and where they work are: 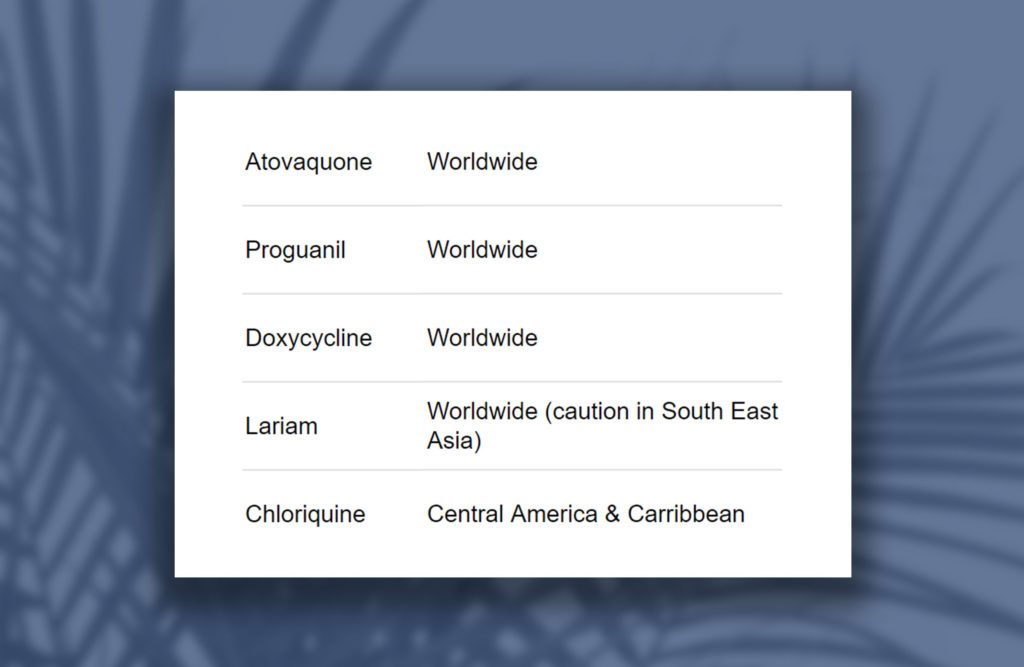 Can I still get malaria if I take antimalarials?

Unfortunately, there are cases where this happens. As most antimalarials are up to 90% effective, there’s still a small chance that you might contract the disease despite taking the recommended medicine. Following the steps above should help to protect you in addition to antimalarial medication, but if you notice any symptoms or feel like you have a bug after being in a high-risk area, get it checked out with your GP.

Luckily not. Despite the fact, you might feel absolutely awful or like you’re laid up with the flu, malaria isn’t a contagious disease. There are some very rare cases where it’s been transmitted via a blood fusion, but you’re safe to be around your friends and family whilst you recover.